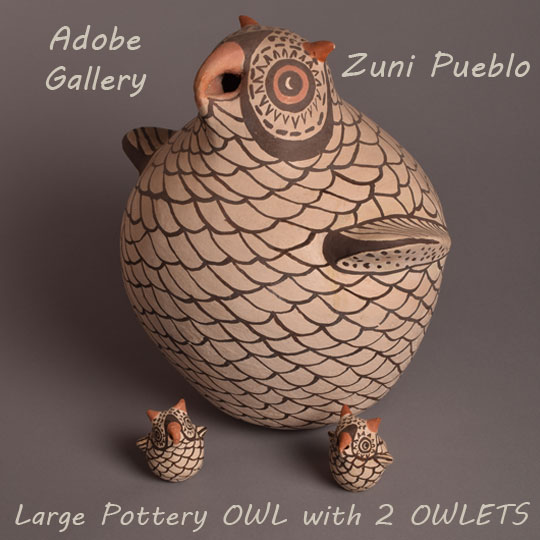 This Zuni Pueblo pottery owl with two small owlets was made in the traditional Zuni manner, using the white to grey native clay with crushed rock temper. It is covered in white clay slip.  The feathers were painted with dark brown to black mineral paint. The ears and beak are a reddish orange mineral paint. While the identity of the artist is unknown, we do know that the maker of this owl was very skillful. The wide body is perfectly formed, with the lifelike head perched on top. Wings flare out to each side. The face of the owl was painted with wide-eyed enthusiasm.  The artist included two small owlets to stand next to the mother to keep her company. They are both perfectly formed and painted.  An owlet is a young baby owl, typically a recently hatched bird that has not yet developed its full mature plumage and is still dependent on its parents for feeding, care, and security.

Pottery making at Zuni almost died out at the beginning of the 20th Century.  Believing the Zuni were a “vanishing race,” anthropologists from Eastern museums participated in the almost complete removal of pottery from the Pueblo. Boxcars were filled with ollas, dough bowls and other examples of Zuni material culture and sent back East. Young potters had no examples to look at, and residents of the pueblo had to rely on commercially-made vessels and containers for daily use.  The art and tradition of pottery making almost died out. Because jewelry was easier to ship, traders encouraged artists to make jewelry instead of pottery.

Condition:  all three owl pottery figurines are all in excellent condition

Provenance: this Zuni Pueblo Large Pottery Owl with two Owlets is from a collector from Colorado