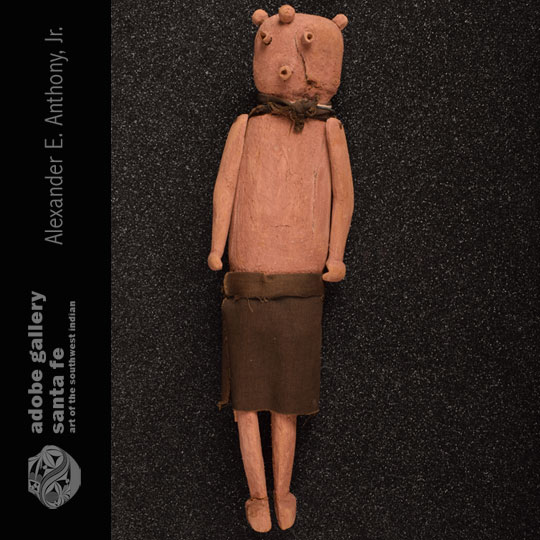 This Mudhead Katsina doll is an excellent example of the finest early carving from Zuni Pueblo.  His arms are attached with nails so they articulate in the traditional Zuni style. In typical Katsina doll fashion, he is dressed in a fabric kilt or skirt.   A black fabric scarf is wrapped around his neck. There is no other clothing. His body is painted with the pink pigment worn by the actual katsinas at the pueblo.  The carving appears to be circa 1930s-40s.

A Zuni emergence myth tells us that the Zuni began a migration as soon as they entered this world.  They first elected leaders for this migration—the son and daughter of the village chief—who went ahead of the others.  During the trip, the brother became enamored with his sister and copulated with her. The result of this incestuous relationship was the birth of ten children that night.  Nine of the ten were misshapen, impotent, and witless, and they became known as the Koyemshi—also known as the Mudhead. The ten Zuni Mudheads resemble each other but actually are different in their masks and gear.

Although the Koyemshi are childlike, or witless in their behavior, they are regarded as the “sages of the ancients, oracles who speak with the voices of idiots mixing wisdom and nonsense in every utterance. They are considered the fathers of the Zuni people and no other group is more sacrosanct or dangerous than the Koyemshi.  To deny them anything, even in one’s heart or mind, is to court disaster.” They are major participants in the Zuni Shalako ceremony and are the first to appear for the event, arriving eight days before the ceremony. Wright, 1985

Condition: this Traditional Zuni Pueblo Mudhead Katsina Doll with Articulating Arms is in very good condition with some cracks in the wood

Provenance: This doll was exhibited at the Hudson River Museum, Yonkers, NY in 1972

Reference and Recommended Reading: Kachinas of the Zuni by Barton Wright with Original Paintings by Duane Dishta, 1985.