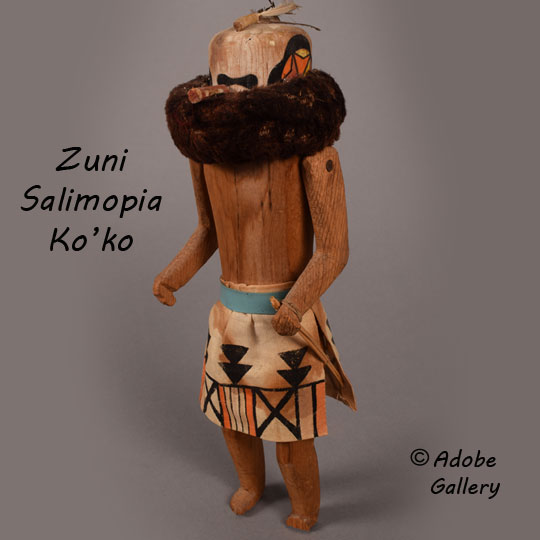 An unknown Zuni Pueblo artist created this Salamobia Ko'ko (Katsina) doll. It dates to the 1930s, and its visible age is one of its most appealing attributes. Later pieces would become more refined and elaborate, especially as far as fabrics and other adornments go, but the simplicity of these early pieces contributes much to their character. This tall, slim figure has articulated arms and an attached tube snout; the remainder of the figure is carved from one piece of wood. A staff appears in the left hand, feathers hang back from the top of the mask, a thick ruff circles the neck, and a colorful kilt hangs from the waist. By Zuni standards, this is somewhat minimally decorated, and the artist's restraint was a wise choice. This is a wonderful example of early Zuni work.

The Zuni have a Salimopia Ko'ko for each of the six cardinal directions. Salimopia is the epitome of youth, vitality, and beauty. "These swift beings are messengers of the gods, guides for the kachinas, and runners whose speed and endurance are greatly valued. They are warriors who may guard important kachinas, such as the Saiyatasha and Shalako, be sent to investigate the anxiety of Duck, carry Kiaklo across the water, or journey to the world quarters in search of seeds to be used by the Zuni. It is they who take the Kolowisi out of the water and bring it to Zuni. They are dangerous beings whose breath alone may bring the wind; hence, they never come in the summer. They punish ceremonial transgressions and guard ceremonies. Their huge ruffs of crow feathers indicate that while they may be the bearers of bad news, such as the warning of approaching enemies, they can take it away just as easily and their role is often that of driving misfortune from the village." Wright 1985

- Yellow Warrior of the North

- Blue Warrior of the West

- Red Warrior of the South

- Many-Colored Warrior of the Zenith

- Dark Warrior of the Nadir, which constitute the Warriors of the Six Directions

Condition: this old doll is missing the front of the left foot and the simulated yucca in his right hand. The right foot has been glued and there are minor stains on the kilt.

Provenance: this Zuni Pueblo Salimopia Ko'ko Katsina Doll is from the collection of a client from Texas