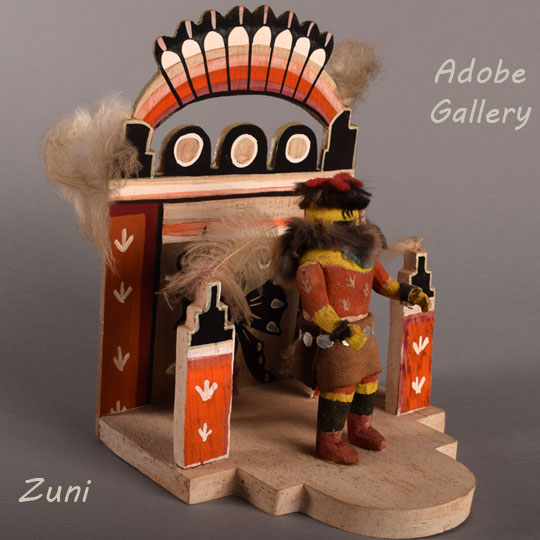 This replica of a Zuni Pueblo altar is dated 1965 and is one made for the commercial market.  It is not signed with the name of the maker.  Featured prominently in the front is a Hehe’a Katsina doll which is 5 inches tall.  The Hehe’a Katsina appear in the performance on the last day of the Summer Dances.

“It is their job to carry in the blankets, knee rests, and metates and to offer minor assistance in the grinding.  Two of these helpers enter behind the grinding maidens and scurry to the center of the plaza, where they open their bundles and spread a large canvas on the ground.  On it they place buckskins underneath black mantas upon which rest the grinding stones, or metates.  Behind the stone on the north side, another manta is folded for a knee rest.  The maidens position themselves behind the metates, while the two Hehe’a rush to put their baskets in front of the stones and set aside the corn and spruce that the maidens hold in their left hands. . . .Hastily, the Hehe’a heap meal on the stones from the baskets and then take their positions at either corner of the canvas in front of the girls, where they clap their hands in time to the grinding song.  As the corn is ground, the Hehe’a feverishly move it into the bowls.” [Wright, 1985:72]  The special Zuni ceremonial commences after the corn is ground.

There is a similar tableau published on page 30 of Southwest Indian Ceremonials by Tom Bahti, without explanation as to its purpose.

Condition: very good condition with some deterioration of the feathers.

Provenance: this Zuni Pueblo Tableau with Hehe'a Katsina Doll is from the collection of a client from Oklahoma

Reference: Kachinas of the Zuni by Barton Wright