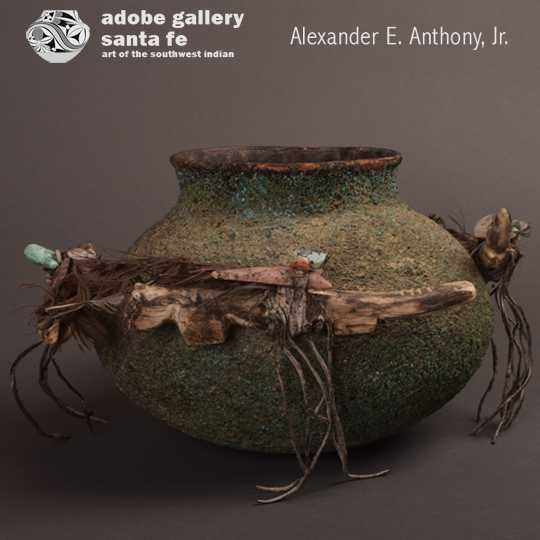 Fetishism is the worship of material things as the abode of spirits, or more strictly, the belief that the possession and worship of an article can procure the services of a spirit lodged within it.  The Zuni strongly believe in fetishes. To them a fetish is always potent, always holy and it can aid them when in their possession.

When not in need of having a fetish in their possession, the Zuni nevertheless provides for it in a manner of respect.  A pottery jar is provided for storage of a fetish and for providing proper care of it. Fetishes are ceremonially fed when not in use.  Food from the table is sometimes used but sacred corn meal is most often given. In performing the rite of feeding, the food is placed in a dish or on a piece of paper, and laid beside the fetish or the jar in which the fetish is kept.  The food is left for 30 minutes or less in which time it is supposed to nourish the spirit of the fetish, after which the food is buried or thrown into the river. It is never burned or just thrown away.

The fetish jar is a standard vessel shape of traditional ollas but has a hole, an inch or so in diameter, through which the fetishes are fed.  The hole is near the bottom of the jar for convenience. Fetish jars are sometimes decorated with designs, as any jar would be, but have been subjected to such frequent washings that the designs are nearly worn away.  Often, the jars have been covered with a substance rubbed over the surface. In ancient times, this was often animal blood, but today it does not seem to be so. More recently, fetish jars are covered in pulverized turquoise.  Fetishes resembling serpents or animals are often attached to the neck of the jar as embellishments. They are not considered to be fetishes like the ones placed into the jar for protection and feeding.

The pottery jars are homes in which the fetishes live and usually would have importance only from their contact with the fetish.  Once it is no longer used to house fetishes, then the jar has no connection to the fetishes and therefore no ceremonial significance and may be given away or sold, even to a non-Indian.

The fetishes around the rim of this jar were made by Zuni artist Teddy Weahkee (ca.1890-1965).  They were fashioned from animal horns and embellished with items meant to strengthen them with power.  Weahkee worked with archaeologists on the excavation of Hawikku, an ancestral Zuni pueblo, thus his exposure to the earliest Zuni fetish styles. The jar itself appears to have been a regular olla that has been coated with turquoise on the exterior. Appropriating regular jars for conversion to fetish jars is the norm. The maker of the jar is unknown.

When Teddy Weahkee got older, his daughter, Edna Leki, began assisting him in making fetishes and fetish jars.  It is not known if Weahkee or Edna was the first to use encrusted turquoise on the surface of the jar. Edna is known for doing that, but the patina of this jar appears to be older than those on which Leki worked.  It is likely that Teddy Weahkee was the maker of this one no later than the mid-twentieth century.

Provenance: from the collection of a family from Texas

A Guide to Zuni Fetishes & Carvings, Volume II: The Materials and the Carvers [SOLD]
by Kent McManis

A Guide to Zuni Fetishes & Carvings, Volume I: The Animals and the Carvers [SOLD]
by Kent McManis

Fetishes and Carvings of the Southwest [SOLD]
by Oscar T. Branson