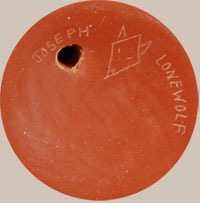 Joseph Lonewolf (1932 - 2014) was a nephew of Santa Clara Pueblo matriarch Margaret Tafoya. Lonewolf started a career as a mechanic and then became a trained machinist, making precision parts with fine engraving. It was this skill that he used to transfer his talent from mechanical objects to precision-carved pottery and jewelry.

In 1971, Lonewolf returned to Santa Clara Pueblo and put his skills to making pottery as had been taught to him by his mother, Agapita Silva Tafoya. His father, Camilio Tafoya, had taken him as a child into the mountains where he witnessed petroglyphs carved into caves and on walls of cliffs. Lonewolf took the lessons of his mother and field trips with his father and combined the two to arrive at intricately carved designs on pottery.

If any potter has mastered the technique of sgraffito pottery, it must be agreed that it is Joseph Lonewolf as he creates the finest designs in sgraffito ever put on the face of a pottery vessel.