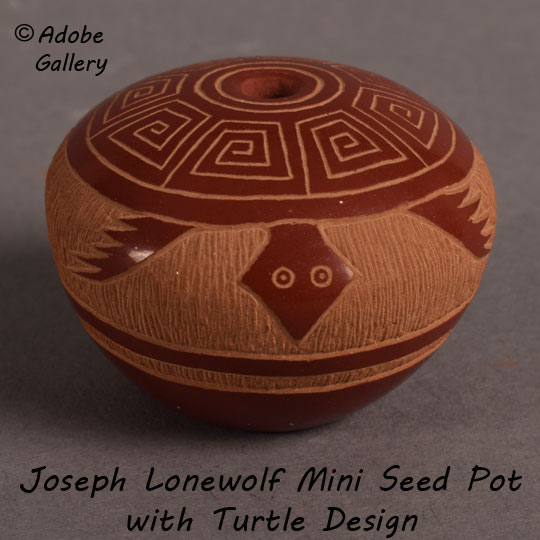 Santa Clara artist Joseph Lonewolf recreated a Mimbres turtle design miniature pottery vessel. The turtle's shell, which is centered around the hole in the top of the pot, is decorated with a rectangular spiral pattern. Two circles with small dots in their centers form eyes; four legs and a tail protrude from under the shell. The turtle is carved in relief, with the clay's tan tone circling around its body. This is a somewhat uncomplicated design by Lonewolf's standards, and its relative simplicity is a great strength. This piece was executed with near-perfect precision. This wonderful miniature seed pot was created by Joseph Lonewolf of Santa Clara Pueblo. Lonewolf came from a family of talented potters, but he still managed to make his mark through his perfection of the carved sgraffito style. In the 1975 publication The Pottery Jewels of Joseph Lonewolf, the artist describes his connection to the Mimbres designs that he often recreated in his own works, saying, "There is really nothing new in what I do. I simply re-discovered some of the secrets known to my ancestors—the Mimbres people—nine or ten centuries ago... And I believe that those old ones are my guides and mentors still, showing me in my dreams and visions how to use the old Mimbres designs in new ways, just as they direct my hands and heart when I work those invisioned [sic] symbols into my pots."

Joseph Lonewolf (1932 - 2014) was a Santa Clara Pueblo potter. Lonewolf was the son of Camilio and Agapita Tafoya, nephew of Margaret Tafoya, and brother of Grace Medicine Flower. Lonewolf accomplished much during his career and received many notable awards, including a SWAIA Lifetime Achievement Award and the 2009 New Mexico Governor's Award for Excellence in the Arts.

Provenance: this Joseph Lonewolf Miniature Seed Pot with Turtle Design is from a private collection