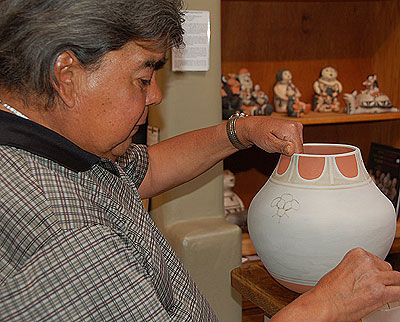 Artist Robert Tenorio is indisputably one of the finest potters of the 20th century from Kewa Pueblo (Santo Domingo). He has never stopped experimenting, learning, and striving to push the envelope. He has tried numerous plants as a source for the black paint, and he has tried numerous clays for the cream slip. Some work, some don't, but he never tires of trying new things.

Robert Tenorio (1950- ) has been a student of pueblo pottery for several years, studying professionally at the Institute of American Indian Arts (IAIA) and on his own. He has studied styles, clays, slips, designs and forms. He has mastered the techniques of producing functional, usable pottery for his own use and the use of other members of the pueblo. He has received many notable accolades for his work and placed pieces in numerous prominent collections.

Photos right of Robert Tenorio painting one of his pottery creations are by ©Adobe Gallery and the artist.