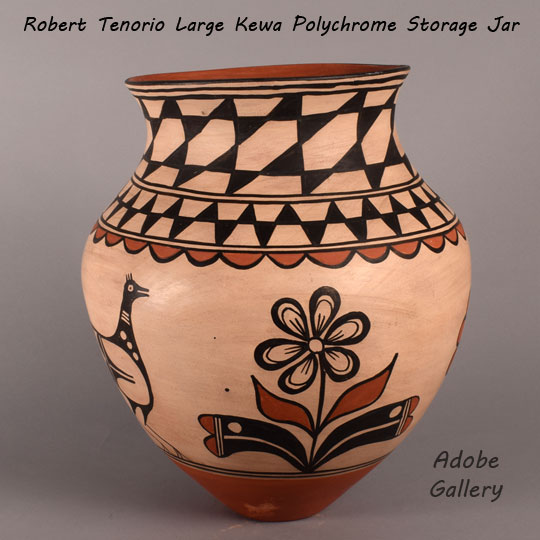 This polychrome storage jar was created by Santo Domingo Pueblo potter Robert Tenorio. We suggest taking a close look at the dimensions of this piece—16-½” x 14”—and making note of the scale. This is a traditional Santo Domingo form, but with this piece it’s been expanded well beyond the size of a typical water jar. This sort of tasteful, skillful modification of a traditional style is exactly what we expect of Tenorio.

Three design bands circle the exterior of this large pot. The upper band, which circles the neck and flared rim, uses diagonal lines of linked triangles. Tenorio alternated the directions in which the triangles face, forming slanted star designs. Below the slanted stars, a second band of linked triangular forms appears. These face directly up and down, creating a stable foundation for the wavy designs up above. The third and largest band claims the majority of the jar’s underbody. Here, Tenorio created two birds and two flower designs. As always, his execution of these forms is excellent. They’re strong, appealing, and full of character, adding a welcome dose of colorful life to the earthy desert that is the cream slip. This is an impressive piece from an outstanding potter.

The bottom of the jar is signed Robert Tenorio, Santo Domingo NM. The jar includes a wood stand, which uses three arms to hold the pot in place. The jar does, however, stand safely on its own, so the use of the wooden stand is optional.

Robert Tenorio (1950- ) is an atist from KEWA, or Santo Domingo Pueblo. Tenorio began his artistic career as a jeweler before moving into pottery making. At first, he created stoneware, and then he transitioned to traditional methods and materials.  Tenorio has evolved into one of the most significant Pueblo potters of today, creating works that have an attractively modern look while being made with ancestral designs and natural materials.  He has exhibited widely and received many notable awards and accolades for his work.

Condition: very good condition, one small rim chip which has been glued into place, some small areas of abrasion to red slip near bottom.

Provenance: this Robert Tenorio Large Kewa Pottery Storage Jar with Flora and Fauna is from a private Santa Fe collection

Recommended Reading: THE POTTERY OF SANTO DOMINGO PUEBLO A Detailed Study of its Decoration by Kenneth M. Chapman