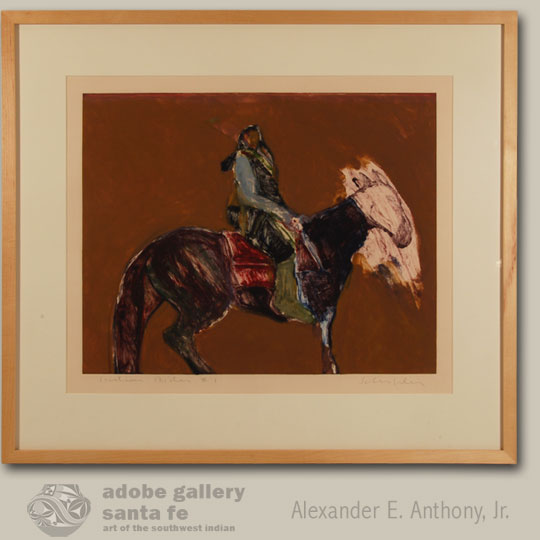 Luiseño artist Fritz Scholder began properly exploring printmaking in 1970 at Albuquerque’s Tamarind Institute.  His compositional style was well-suited to the medium of lithography, and he very quickly came into his own as a printmaker.  He would go on to create hundreds of prints at Tamarind and other print shops around the Southwest, including Santa Fe’s Hand Graphics.

“Indian Rider #1” is an abstract expressionist take on a subject that has been drawn and painted many times: an Indian on horseback.  Scholder made the most of the monotype process’ advantages, using a larger color palette than he would have with a lithograph or serigraph.  His decision to use mostly cooler colors works beautifully.  As in many of his finest prints and lithographs, the cream-colored paper is allowed to peek through the thick ink in just one area: the horse’s head.  That Scholder could take this well-worn subject—which he had earlier in his career vowed never to paint—and make it seem so fresh and exciting is a testament to his boundless creativity.

“Indian Rider #1” is a monotype print—it is totally unique and was not printed in multiples. This monotype was completed in 1978 at Hand Graphics in Santa Fe.  Michael Costello, Hand’s current owner and Master Printer, kindly weighed in on its origins via email: “It is definitely a monotype. The printer was most likely Ron Goad (the main monotype printer at that time), though there is no definitive way to confirm this. I also believe that it was printed from a zinc monotype plate.”  It is signed and titled by the artist, and marked with Hand Graphics’ chop mark.

Fritz Scholder (1937-2005) was born and raised in the upper midwest, and although he was one quarter Luiseño, he did not identify as a Native American.  After he obtained his Master’s degree, he was hired to teach advanced painting at Santa Fe’s Institute of American Indian Arts. It was here, after visiting his students’ homes and  attending their ceremonies, that he began to recognize the need for a modern portrayal of the Native American.  Scholder used his abstract sensibilities and postmodern creative voice to portray Indian subjects as he believed that they needed to be portrayed: honestly and without regard for tradition.

Provenance: "Indian Rider #1" Monotype by Fritz Scholder is from the large collection of a Santa Fe resident