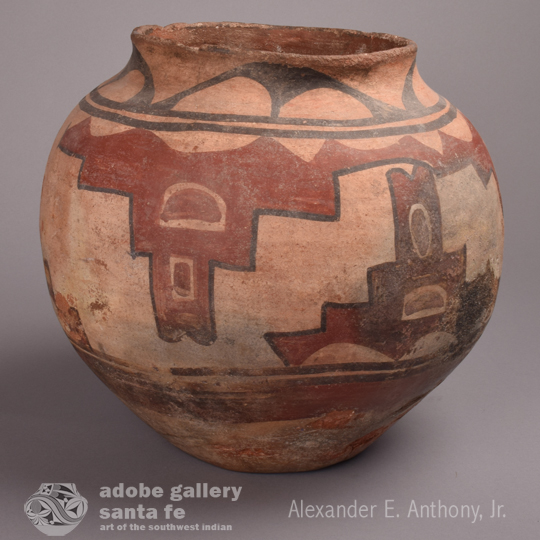 This VERY RARE 19th Century Santa Ana Pueblo Polychrome Pottery OLLA from Denver Art Museum dates to the mid- to late-1800s. It is comprised of sand as a tempering agent, a reddish-brown paste, slip, and mineral paints like those used at Zia. Potters at Santa Ana abandoned crushed basaltic temper and started using sand temper after reestablishing their ancestral pueblo from near Zia to a location near the Rio Grande. This occurred by the late 1700s.

The paste shows evidence of spalling—a trait associated with sand tempering agents. This is quite typical of Santa Ana pottery. Even though it has some slip damage and some cracks, one must consider this piece museum quality.  From looking at the recent book on Santa Ana pottery, one would suspect that pottery production at Santa Ana Pueblo was ample in the 19th and 20th centuries, but very little pottery from this time has survived. Most of what has survived is in museum collections. Rarely does one find it for sale at auction or in galleries.

Provenance:  the Denver Art Museum records show an accession date of 1934 to its collection,;however, they do not show an estimated age of the jar.  It was deaccessioned on 28 June 2003 and sold for the museum through Artemis Gallery in Louisville, Colorado.

Condition: the water jar shows considerable wear from use.  There are surface abrasions throughout the vessel wall, a vertical crack from rim to lower body (stabilized), and small rim chips.  It was a well-used jar and a very collectible jar for one who appreciates ethnographic wear.

THE “RAIN BIRD” A Study in Pueblo Design [SOLD]
by Harry P. Mera