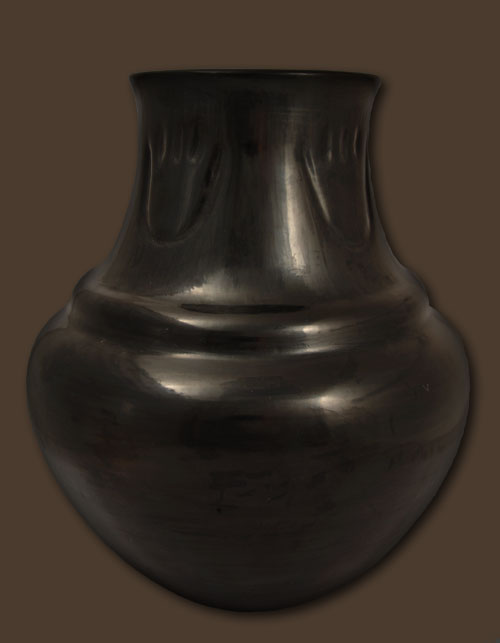 If ever there was a signature piece of pottery associated with Margaret Tafoya, it is the black jar with bear paw impressions. This is a superb example of that style. It has an extremely fine burnish and a deep black firing. The neck slopes in from the shoulder and rises gracefully to end in a curved-out rim. Around the neck are four bear paw impressions. Legend has it that a bear is always able to find water, therefore a jar with bear paws will never want for water.

The jar is in beautiful condition. There were a few minor scratches that have been professionally touched up.

COMMENTS: Some experts have contended that smothering pottery during the firing process creates a carbon smoke that penetrates the pottery, turning it black. Even though several books describing black pueblo pottery attribute the color change to carbon, the reduction of iron oxide is the correct mechanism. Ceramicists, describing ancient styles of Old World pottery, state that iron impurities in clay form red oxide at red heat, but if air is lacking during firing, iron impurities in clay form black magnetite.

This item was presented in the Indian Pueblo Cultural Center's special exhibit TIMELESS BEAUTY in Albuquerque, New Mexico, January-August 2008. This exhibition celebrated the achievements and impact made by some of the most renowned Pueblo women artists on the preservation, exposure, and development of the indigenous and contemporary art forms of Pueblo people. Curated by the IPCC in collaboration with Santa Fe-based Adobe Gallery and the School for Advanced Research, TIMELESS BEAUTY showcased a collaborative collection of artwork created by these influential women.