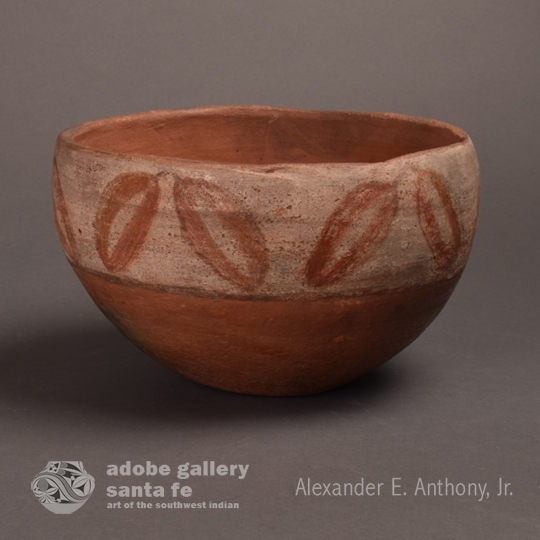 Pottery from Santa Ana Pueblo is among the scarcest of all pueblo pottery. According to Batkin¹:

"As far as is known, all decorated pottery made at Santa Ana in the nineteenth century was polychrome. Reliable sources state that pottery was made in considerable quantities until 1900, although not much has survived. By the 1920s, the tradition had practically died out. Apparently no potters entered their work for judging at the Indian Fair between 1922 and 1924; examples made between 1925 and the late 1940s are rare."

This bowl is a late 19th century piece. The bottom is flat and the rim has a slight inward flexure. The design is a continuous chain of alternating tilting left and right oval elements painted in red, outlined in black and painted on a white slip. A black line encircles the bowl at the bottom of the white slip and separates it from the red underbody slip that is stone polished. Beautiful fire clouds appear mostly on the red underbody, and occasionally on the sidewalls.

Condition: the RARE Santa Ana Pueblo Historic Pottery Bowl is in very good condition with only one rim chip that is confined to the interior of the rim.

Provenance: from a gentleman of Santa Ana Pueblo