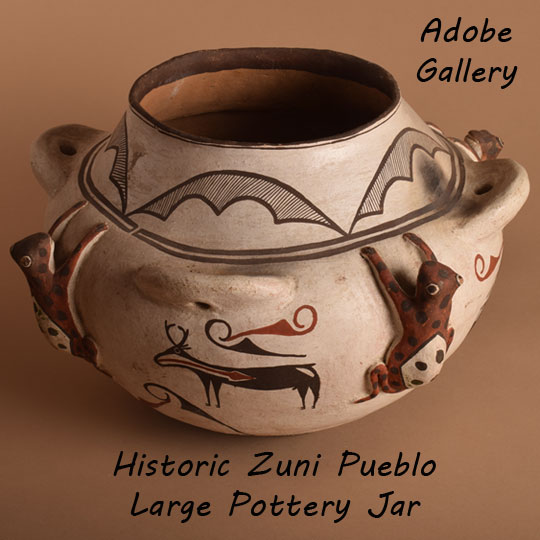 This is the largest and finest Zuni Pueblo frog jar I recall ever seeing. There are four polychrome frogs, four heartline deer and four lug protrusions. None of the frogs or protrusions has been broken or damaged. There is a minor rim crack but no other signs of damage or abuse. The jar was examined under UV light without any evidence of repair.

The four protrusions with holes might appear to be handles by which to hang the jar, but they are actually there on which to tie eagle down feathers when used ceremonially.  There is no logical reason that the jar would be suspended by rope.

Reprinted here in its entirety is a notarized letter from the previous owner:

To whom it may concern:

This is to advise the three Ollas, the Canteen and the small childs Toy that I sold to Mr. Robert D. Tichenor, Star Route, Russel, Kansas were obtained from the Indians on the Zuni Indian Reservation located approximately thirty-five miles south of Gallup, New Mexico.

My father, Clyde E. Hopper, was a hoisting engineer employed by the Federal Government to build a dam across a river for the purpose of supplying water to the indians on the reservation.

If memory serves me correctly, father made his first trip to the dam site in 1899, however actual construction did not begin until two years later (1901), the project was completed in the fall of 1905.

Practically the entire project was accomplished with the use of manual labor. All common labor was supplied by indians from the various tribes in that general locality, mainly Zuni and Navajo.

There was quite a language barrier, as the indians did not [know] english and the engineers and supervisors did not speak the native tongue, therefore interpreters were required for all instructions and this delayed the progress of the work.

Father would go to the reservation early in the spring and work continually until late in the fall. The winters were so severe the indians would not work, therefore the project was closed down for the winter months.

When father would return home for the wintermonths [sic], he would always bring quite a large assortment of indian artifices, namely Navajo [sic] blankets, indian pottery and indian jewelry. (At one time we had about thirty Navajo blankets and rugs, but this number has dwindled to about ten)

It was on one of these trips, the above mentioned pottery was brought from the Zuni Indian Reservation to Garden City, Kansas. These items have been in the family home continuously, therefore I know them to be authentic indian pottery dating back prior to 1905.

I have loaned Mr. Tichenor photographs, of which he plans to make reproductions of the project, construction work and its progress, the dam site, the river, the general terrain, indian pueblosand [sic] indians, civilian engineers and supervisors, indian workers and other related photographs. While I have not seen these reproductions, I can assure you the originals are authentic and I am sure a man of Mr. Tichenors [sic] integrity would not falsify any of the facts.

Condition:  this Zuni Pueblo Large Jar with Frogs and Heartline Deer is in very good condition.