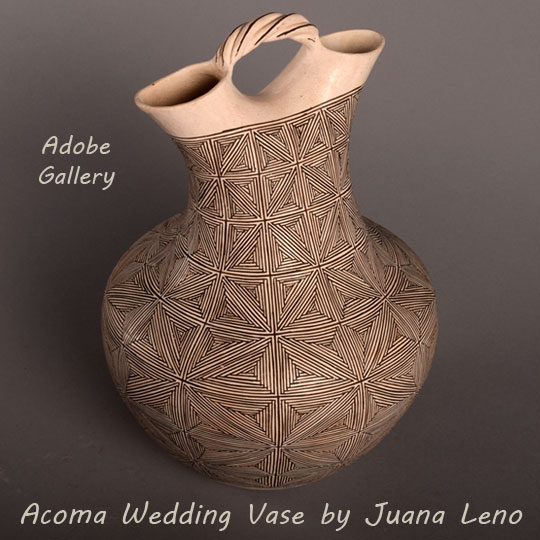 It is not possible to look at this wedding vase without marveling at the magnificent vessel shape, and then becoming immersed in the design.  Acoma Pueblo artist Juana Leno created a masterpiece. At its smallest scale, the design is composed of squares, each of which is bordered by parallel fine lines, and then crossed at a forty-five degree angle with more parallel lines.  There are 12 squares on each of the 8 rows, for a total of 96 squares.  What patience it must take to repeat such a complicated design 96 times, and to have them be consistently to scale.  The entire wedding vase, with the exception of the base and uppermost top section, are filled with the fine line design.  The wedding vase spouts were left with the white slip exposed and the twisted arched handles are white with black lines highlighting the twists.  The underside is white and signed Mrs. Juana Leno. Acoma, N. Mex.

Although it's not as widely known as Lucy Lewis' work, the pottery made by Juana Leno is some of the finest ever produced at Acoma Pueblo.  This pottery jar was completed in a style which both of these potters explored frequently: a fine line design, with rows of parallel lines intersecting with one another.  Their intersections form diamonds and kite-shaped four-sided geometrics. These figures arrange themselves around center points, forming images that could be flowers or stars.  One should note that an enormous amount of skill is required to successfully execute such a complex design. Leno handled this one beautifully.

Juana Leno (1917-2000) Syo-ee-mee (Turquoise)—formerly Juana Louis Vallo—was one of the finest potters of the twentieth century at Acoma Pueblo. She quietly worked every day producing extraordinary pottery without seeking acclaim. She was a wonderful woman and very modest about her talent to produce such fine pieces. She may not have achieved the fame she was due, but it was not because of the lack of quality in her work, but because she chose to remain quietly at home and not seek fame.

For years, I drove out to her home at Acomita and purchased pottery from her, and I was always charmed by how graceful she was and what beautiful work she produced. She was one of the few Acoma potters from whom I purchased pottery regularly.

Provenance: this Acoma Pueblo Black on White Fine Line Design Wedding Vase by Juana Leno is from the collection of a gentleman from Albuquerque