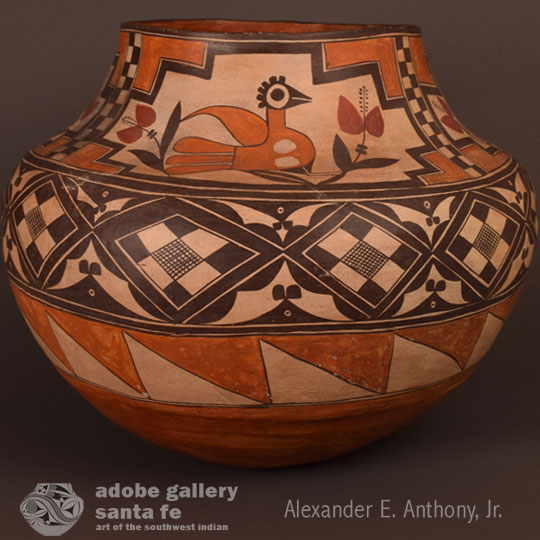 This historic four-color Acoma Pueblo storage jar is an exceptional work of art that immediately commands the attention of any viewer. Adobe Gallery doesn't often see Acoma storage jars on the market, so we were very excited when this bold, bright and beautiful piece made its way to the gallery.

During the busy tourist season, Adobe Gallery sees a lot of visitors who are unfamiliar with pueblo pottery. It's always interesting to observe which pieces pique their interest and prompt them to ask questions-" What is this? Who made this? Where is this from?"-and which pieces don't. This is one of those pieces that, during the week or so that it's been displayed, has prompted questions from visitors with no previous knowledge or appreciation of pueblo pottery. Of course, with this being a rare historic piece, it's not just the newcomers who are appreciative-almost every one of the experienced collectors and dealers who has visited recently has marveled at this beautiful jar.

After consulting with experts and researching published examples, Adobe Gallery has concluded that the jar dates to between 1885 and 1900. The jar was most likely made for use, but it does not show any excessive wear patterns or damage beyond a single, barely visible crack and few minor abrasions. It's been handled carefully over the years.

While its age and condition are notable, it is the design work that makes this a standout jar. Most notably unusual is the number of design bands—three, not counting the reddish-orange underbody, rather than one or two.  Each of these bands is entirely unique, and they complement one another wonderfully. The upper band features an incredible design which is repeated four times. Central to the design are birds with huge, expressive eyes, perched upon flowers. Each bird stands in the center of a square, each corner of which contains an L-shaped orange block.  The interiors are outlined in thick black, creating lively, jagged frames around each bird. Vertical checkerboard designs separate each of the four repeating designs.

The middle design band, which circles the jar’s widest point, features a brilliantly composed series of geometric patterns. Thick black lines zigzag up and down from the substantial framing lines, meeting in the center and creating thin white diamonds which contain smaller diamond checkerboards.  The lower band is simple but strong: white and orange triangles, divided by a thin black line, circling the jar. This modest-but-creative pattern provides a smooth transition between the elaborate upper half and the plain orange bottom.

The jar’s size and shape contribute immeasurably to its beauty.  At 15 inches in height and 18 inches in diameter, the jar has a large amount of surface area on which it displays its wonderful colors.  Its smooth but dramatic curves are typical of Acoma jars from its time period. It leans just a bit to one side, which is not unusual for a piece of this size and is, in this case, charming and appealing.  To put it very simply, this jar has a powerful presence and an undeniable beauty. It is an exemplary piece of historic Acoma pottery that deserves the attention of the collector who appreciates rare and exciting works.

Condition: Excellent condition for a piece of its age—small surface abrasions around the jar’s widest point; a two inch crack runs down from the rim. During a thorough blacklight examination, we were delighted to find no signs of repair or restoration.