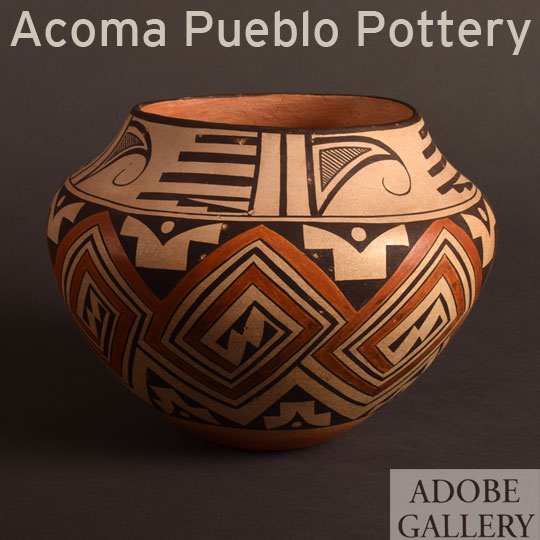 This Acoma Pueblo pottery jar by Juana Garcia has a strong and intriguing design of maze squares connected in chain-like fashion.  They were made stronger by using an orange color in contrast to the rest of the design that was executed in black pigment.  Inside the maze is another maze executed in black which also connects to its adjacent one to make a continuous connection around the body.  The design on the neck is the head of a parrot opposite a stack of black parallel lines.

The Acoma potter, Juana Garcia, lived from c.1890 to 1988, for almost one hundred years.  She is reported as having started making coiled pottery in the 1940s. This jar was signed with her name and the name of the pueblo so it is quite likely one made in the 1960s or a little later.  It was purchased by the current owner in 1988.

In checking our records, we find that we have no record of ever having one of her works.  If this is an indication of her work, then we missed out on some beautiful jars over the years, as this is a magnificent work of art.  One of the joys in this line of work is being exposed to such works of art on a daily basis.

Juana Garcia was the daughter of Antonio and Lupita Garcia and the grandmother of Anita Lowden and Stella Shutiva, two potters of exceptional talent.

Condition:  this Acoma Pueblo Polychrome Pottery Jar with a Maze Design by Juana Garcia is in very good condition

Provenance: from the collection of a gentleman from Florida who purchased it from Chimayo Trading Post in Espanola, New Mexico in 1988