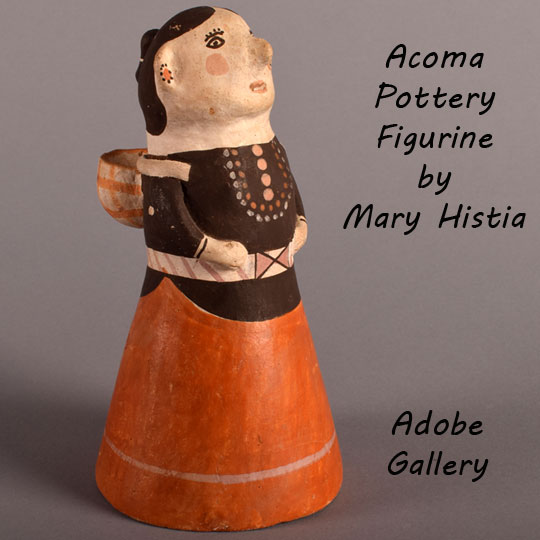 Acoma Pueblo artist Mary Histia created this marvelous pottery figurine of a female with a burden basket on her back. She is not signed except for Acoma, N. Mex. on the underside in fired-on paint. She is hollow.

She has a sculpted face with painted eyes and eyelashes, painted earrings, black hair tied in a chonga in back, black long-sleeve blouse with button front, two-strand painted necklace, belt, and orange flowing skirt.

I have seen several of these in past years and all had Mary Histia's name added as an afterthought, as if someone wrote her name on the piece after purchasing it.  This one was purchased directly from Mary Histia in 1967, so the maker is not in doubt.

There have been two Mary Histia from Acoma. The most famous one is the one commonly called Acoma Mary; based on the notation "Acoma, Mary holding olla, 1900," on a photograph by Adam Clark Vroman. Over the years, the comma between Acoma and Mary began to be overlooked so that she began to be called Acoma Mary, which is incorrect as that was a misinterpretation of Vroman's notation. This Mary Histia was born in 1893 or 1895 and died in 1973.  She was married to San Juan Hishtia, Jr.

The second Mary Histia is known today as Mary Lewis Garcia, daughter of Lucy Lewis. Mary's first husband was David Histia, Sr. therefore, she was, for a time, Mary Histia.  In Rick Dillingham’s book, Fourteen Families in Pueblo Pottery, she is listed but not included as a potter in the exhibit.  Our records do not indicate that we have ever had pottery by this second Mary Histia, so we agree that she was probably not a potter.

Condition: particularly good condition with a single spall spot behind her right arm

Provenance: this Acoma Pueblo Standing Female Pottery Figurine with Basket on Back by Mary Histia is from an estate in Albuquerque

Recommended Reading: The Pottery of Acoma Pueblo by Lanmon and Harlow