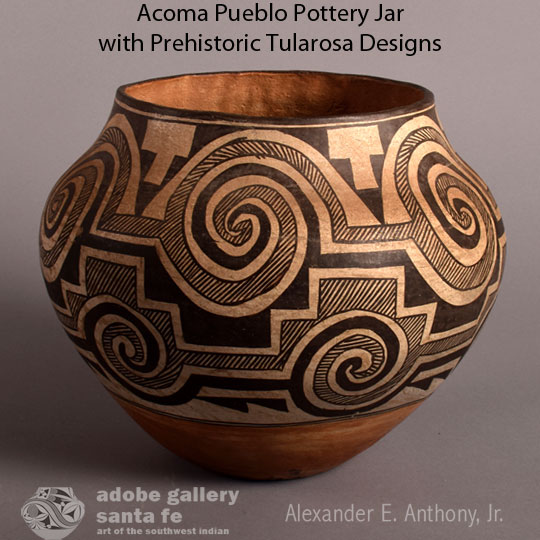 This circa 1930s Acoma Pueblo jar is painted with a design from the prehistoric Tularosa culture.  The fine line and swirl designs were traditional to the Tularosa people. The use of Tularosa designs by potters of today shows their respect for those who came before them and for the beautiful works they left behind.  Certainly, potters a hundred years from now will reciprocate and use designs from the twentieth- and twenty-first century potters—a continuation of tradition.

In the early twentieth century, potters at Acoma Pueblo began using designs from ancient pottery of the Tularosa region of New Mexico.  Tularosa Black-on-white pottery existed from 1150 to 1325 A.D. Designs consisted of curvilinear and rectilinear opposed hachured and solid bands.  Using these ancestral designs fits well with the concept of adding ground-up potsherds to use as temper in new pottery. Every Acoma pot has a portion of a previous pot incorporated into its existence. Using ancestral designs is a complimentary act.

The justification for Acoma potters using Tularosa designs is a test trench dug at Acoma that revealed small amounts of pottery dating between A.D.1100 and 1300, among which were Tularosa Black-on-white.  If these existed at Acoma in circa A.D.1200, then the use of such designs was quite acceptable to potters of the twentieth century. There was no one to object to their reintroduction by modern potters.

The jar is signed on the underside Acoma N. M.   It is estimated to be circa 1930s.  Acoma potters were inspired by designs used a thousand years ago, but they did not copy them but used them as inspiration for their own design creations.  The execution of the design on this jar was expertly carried out. Each black application was applied with precision.

The Pueblo of Acoma is located about 45 miles west of Albuquerque and 16 miles south of Interstate 40.  The original village is perched on top of a mesa at an elevation of about 5000 feet above sea level and about 1000 feet above the surrounding ground level.  Nearby is Mount Taylor—sacred to the Native peoples—rising to eleven thousand feet above sea level. The village of Acoma exists somewhat in a time warp. Very little has changed atop the mesa.  The houses are adobe or rock, the streets are dirt, and there is no electricity available. Potters work in the same manner as those hundreds of years ago. It is a quiet and restful place to create pottery.  Many of the potters also live in the surrounding villages of Acomita and McCartys.

Provenance: from the collection of a resident of San Felipe Pueblo Acoma - The People of the White Rock [SOLD]
by

ORIGIN MYTH OF ACOMA AND OTHER RECORDS [SOLD]
by