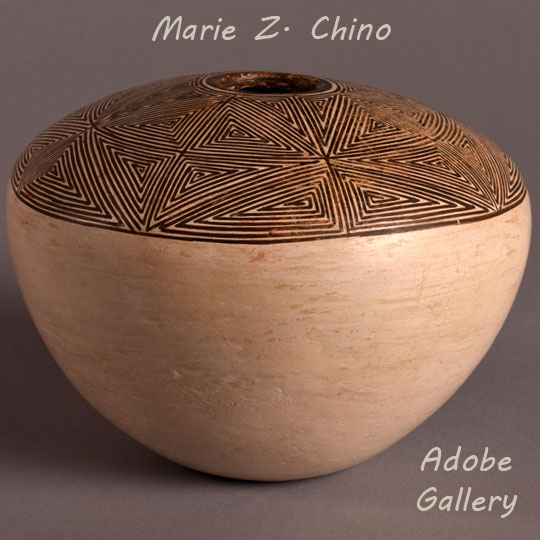 This Acoma Pueblo Pottery Seed Jar by Marie Z. Chino has the most complicated fine line design one could create.  It is faceted in the shape of triangles with lines running vertical, horizontal and at diagonals.  Take a moment to look at the complicated design and imagine painting such with a homemade yucca brush.  It is truly amazing that one could paint such a design and keep it organized to the extent this was accomplished.

Who could do such an amazing task?  Marie Z. Chino, of course. Chino was a master potter and it is understandable why collectors admire her work so enthusiastically.  She was certainly one of the Acoma potters who made particularly important contributions to the art of pottery making in the period following World War II. She had been making pottery since 1920.  She won her first award at Indian Market when she was only 15 years old. Some of her pieces were among the prizewinners at the first Southwest Indian Fair (predecessor to Santa Fe's Indian Market) in 1922.

Marie Zieu Chino (1907-1982) is considered one of the significant ceramicists at Acoma and was the matriarch of a very talented family of potters. She is best known for her black-on-white pottery.  Along with Lucy Lewis and Sarah Garcia she led the revival of ancient pottery forms of the ancestral pueblo potters. She was one of the women who was inspirational in the movement to revive the use of ancient Mimbres designs on contemporary Acoma pottery.

Condition: very good condition structurally with some abrasion to the painted design.

Provenance: this Acoma Pueblo Pottery Seed Jar with Triangular Fine Line Design by Marie Z. Chino is from the collection of a client from Santa Fe