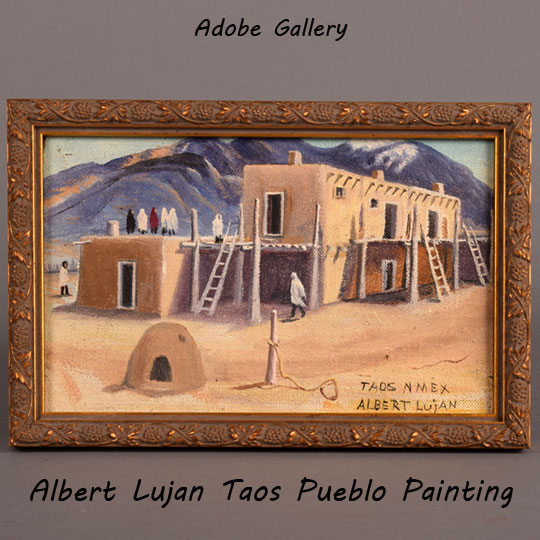 This original painting was created by Toas Pueblo artist Albert Lujan.  As per the artist’s usual, the piece features Taos Pueblo.  Lujan’s paintings are typically quite serene, presenting quiet and beautiful Pueblo scenes.  This particular piece varies from the norm by including people and focusing into a smaller, more detailed scene.  Lujan’s work here is strong, using an immensely appealing palette of dusty tan and white tones to draw the viewer into the image.

In the foreground, Lujan placed an horno bread oven and a short stake with a rope attached.  A bit further into the distance, a long adobe building rises from the earth, with wood structures, beams, and ladders extending from and supporting its edges.  A crowd is gathering on the roof, staring off at something or someone in the distance.  Perhaps they’re admiring the majestic mountain range in the background, which appears here in a purple tone that will be familiar to anyone who has paid a visit to Taos.  Perhaps, also, they are witnessing a dance in the plaza behind this building.  This is another fine example of Albert Lujan’s work.

The painting is signed Albert Lujan, Taos, N Mex in lower right.  It is framed in a carved gold frame.

Albert Lujan (1892-1948) Weasel Arrow was an early Taos Pueblo painter.  Lujan was ahead of his time in painting European-American style art rather than the Santa Fe Indian School style being practiced by most of the other Native American artists of his time. He, along with Albert Looking Elk Martinez and Juan Mirabal, was greatly influenced by the Anglo Taos artists of the time.  The work of all three artists was shunned by collectors and the Museum of New Mexico Fine Art Gallery because it was too much like that which the Taos and Santa Fe artists produced. Today, however, collectors and museums have a great appreciation for works by the “Three Taos Pueblo Painters.”  Lujan, who was also a farmer and minister, never received any formal artistic training.  He began painting around 1915, which would place him among the earliest known pueblo painters.  He specialized in painting the multi-storied buildings at the pueblo, usually devoid of people. Typically, these views included one of the main pueblo houses or an isolated adobe residence, each framed by beehive ovens, majestic mountains, a beautiful blue sky, and, occasionally, a ristra of chili. Lujan passed away in 1948; his works are highly collectible today.

Provenance: This Albert Lujan Original Painting of Crowd Gathering on a Small Building is one of eleven paintings we recently acquired that were collected by Mary Louise Mark (1878-1972) of Westerville, Ohio, who was a Professor of Sociology and Statistics at Ohio State University.