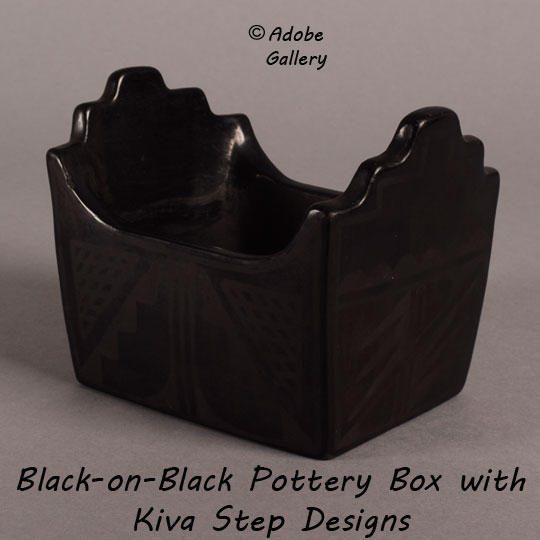 This black-on-black pottery box was created by Maximiliana Montoya Martinez, a San Ildefonso Pueblo potter who is most frequently referred to as "Anna." As the eldest sister of Maria Martinez, Anna was a member of one of the most significant families in the world of Native art. A look back at previously listed pieces by the artist reveals a skilled painter with an eye for atypical vessel forms.

This box is completed in the black-on-black style that was popularized by the Martinez family. It's rectangular, with walls that flare outward in a subtle manner from the flat base. The two shorter sides rise up above the rim into kiva step designs, which are echoed in the painted designs that appear on the longer sides. Inverted rain clouds appear on the shorter sides, hovering over pairs of triangular forms with attractive interior patterns. The polished surface is beautiful, and the design work is strong. Both the vessel itself and the painted designs were executed with style and skill.

The bottom of the box is signed Anna.

Maximiliana Montoya Martinez (1885-1955), or Anna, as she was known, was the eldest sister of matriarch Maria Martinez. She was an early maker of Black-on-black as well as Polychrome pottery. Her shapes were refined, and her burnishing was excellent. In addition to painting designs on her pottery, she also assisted Maria by painting some of her pottery. Maria stated that Anna would assist her when the men were out in the fields. Anna's husband, Crescencio Martinez (1879-1918), painted some of Anna's pottery and it is known that he, too, painted designs on some of Maria's pottery before Julian started assisting Maria.

Condition: good condition, with a slip crack on one side and a few light abrasions

Provenance: this Black-on-Black Pottery Box with Kiva Step Designs is from a private Colorado collection