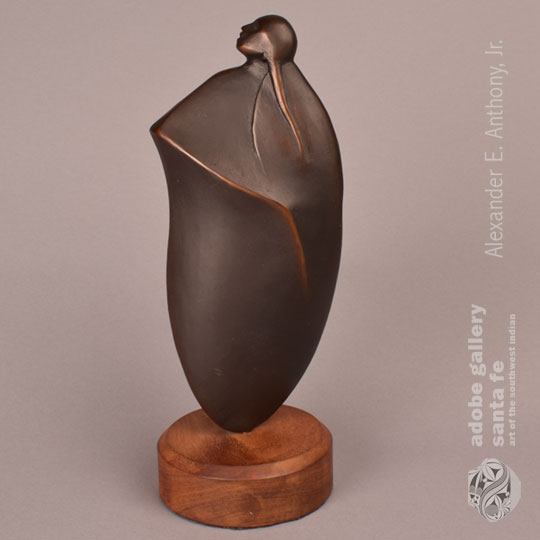 This beautiful bronze sculpture by Apache artist Allan Houser is titled “Pride.”  Houser’s subject here is a Native American person depicted in profile.  The image’s small head includes carefully depicted facial features and long hair, which extends down onto the abstract expanse that is its body.  The body—graceful, gentle, impossible to define in simple geometric terms—is where Houser’s creativity shines. Viewed from any angle, the piece is elegant and attractive.  Its color—dark brown, and a bit lighter at the edges—is wonderful, too. These smaller pieces are wonderful opportunities for collectors who wish to own works by this very famous and talented artist.

Allan Houser (1914-1994) Haozous was a Chiricahua Apache painter, sculptor, teacher and illustrator whose works are displayed in major museum collections around the world. Houser was born in 1914 near Fort Sill, Oklahoma and passed away in 1994.  A Warm Springs Chiricahua Apache, he was the great nephew of the famous Chiricahua warrior Geronimo. At the age of 20 he went to study at the Santa Fe Indian School under the tutelage of Dorothy Dunn. While he excelled at The Studio, he found it confining and constricting.

Today, Allan Houser is recognized as one of the most successful and accomplished Native American artists of the 20th century. His works are included in the permanent collections of the Smithsonian Museum of American Art, the National Museum of the American Indian, and many other prestigious institutions.  His many accomplishments include receiving a Guggenheim fellowship and being the first Native American to receive the National Medal of Arts. Through his sculptures, his paintings, and his efforts as an educator, Houser’s voice still remains one of the strongest in the world of Native American art.

Provenance: private collection, originally purchased in 1994 from an Illinois Gallery ART AND INDIAN INDIVIDUALISTS
by Guy and Doris Monthan