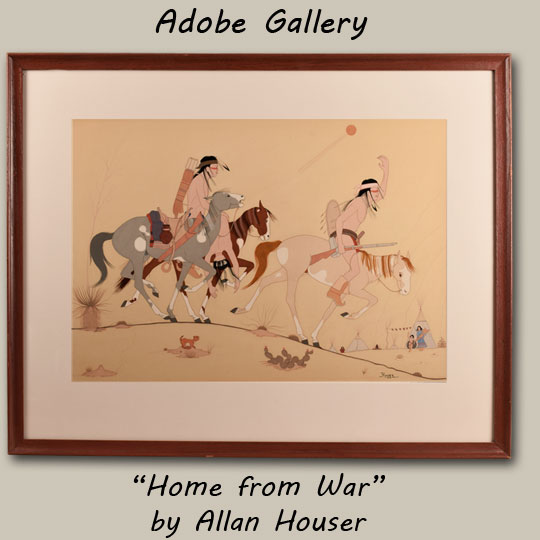 This original painting by legendary Apache artist Allan Houser is titled “Home from War.”  It was completed in 1938, most likely during the artist’s time at the Santa Fe Indian School.  Houser was 24 years old and had received just a few years of formal training when he created this piece. “Home from War” suggests that Houser was an immensely skilled painter even during the early years of his long and fruitful career.

Clara Lee Tanner’s Southwest Indian Painting: A Changing Art praises the “immense vitality” of Houser’s figures, and the exciting sense of movement that is seen in his works: “In many of Houser’s paintings there is splendid action.  Mouths are wide open in speech, arms participate in gestures, legs of the horses are lifted in a high-stepping manner. Carefully drawn outlines often stress the vigor of figures; modeling lines make them more real.  Coupled with his talent for drawing and the simplicity of line which tells so much is Houser’s ability to handle color.”  Tanner’s words most definitely apply to this painting.

Houser’s subject here is a group of three men and three horses.  Though the title makes it clear, the image is strong enough for the viewer to infer that the men are returning home after a battle. A man and his horse lead the party.  He looks forward and raises his left hand above his head, beckoning to someone who is not visible to the viewer.  He holds a rifle in his right hand and wears a knife on his waist.  His two allies ride directly behind him. One man, wearing a back quiver, looks intensely in the same direction as the leader.  A third man did not make it through the battle unscathed.  He is draped over the second man’s horse.  This explains the leader’s gesture—he’s calling for help.

Houser stepped outside of the boundaries of the Indian School style by adding a second group of people in the distance.  Without this group, the image would be incomplete, as it shows the viewer exactly what the warriors are coming home to.  Two women look directly at the warriors.  One of the women, obscured partially by the ground plane, has her hands on her hips.  The other woman walks towards the warriors.  She carries an infant and is accompanied by a young boy.  The boy runs, flailing his hands emphatically, to the returning men.  These people must be the warrior’s families; their presence raises the stakes exponentially.  Houser’s soft, naturalistic color choices add an element of warmth to the very strong image.

Houser’s ability to handle an image like this with style and grace sets him apart from many of his contemporaries.  In the hands of a lesser artist, this scene might feel sad.  Thanks to his delicately rendered figures and the wise inclusion of the warrior’s community, the image feels truthful and beautiful.  “Home from War” reminds us of exactly why these early Houser paintings are so rarely available.  They rank among the most beautiful and the most historically significant Native American artworks.

The painting is signed “Houser” and dated “‘38” in lower right.  It is framed under a wide off-white mat in a simple wood frame.

Allan Houser (1914-1994) Haozous was a Chiricahua Apache painter, sculptor, teacher and illustrator whose works are displayed in major museums and prominent private collections around the world. Today, he is recognized as one of the most successful and accomplished Indian artists of the twentieth century. His works are included in the permanent collections of the Smithsonian Museum of American Art, the National Museum of the American Indian, and many other prestigious institutions. His many accomplishments include receiving a Guggenheim fellowship and being the first Native American to receive the National Medal of Arts. Through his sculptures, his paintings, and his efforts as an educator, Houser's voice remains one of the strongest in the world of Native American art.

Condition: excellent condition; this painting has not been inspected out of the frame.

Provenance: this Original Apache Painting titled "Home from War" by Allan Houser is from the collection of a resident of Arizona