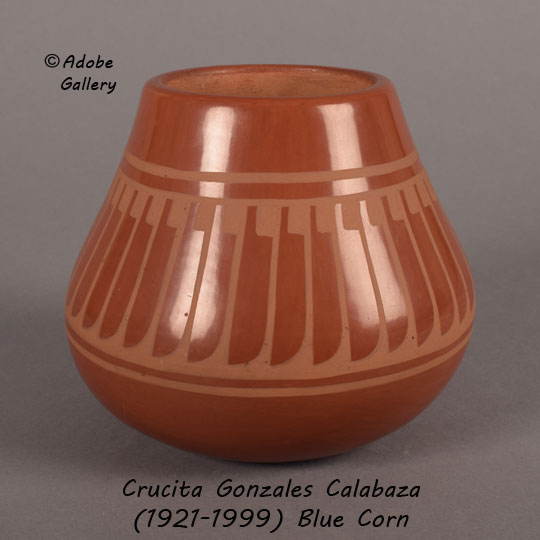 This redware pottery jar was made by Crucita Gonzales Calabaza, or "Blue Corn," of San Ildefonso Pueblo. It likely dates to around 1940, and it is a strong example of Blue Corn's early-career work. With its widest point hanging down so close to the base, the vessel's shape might bring to mind a drop of water.

The jar is slipped and polished beautifully, with a lustrous red tone that will appeal to many. A single design band in tan appears, creating a repeating eagle feather pattern around the jar. Framing lines appear above and below the band of feathers, with the lower framing line falling just below the jar's widest point. This is an excellent piece from early in the career of an artist who would go on to become quite significant. The bottom of the jar is signed Blue Corn, San Ildefonso Pueblo.

Crucita Gonzales Calabaza (1921-1999) Blue Corn was born at San Ildefonso Pueblo. She was encouraged by her grandmother, at an early age, to "forget school and become a potter." She went on to become one of the greatest and most versatile San Ildefonso ceramicists. She made pottery for over 60 years, working in black, red, and polychrome, using a variety of forms. Blue Corn's house was located across the plaza from that of Maria Martinez, but there was no competition between the two artisans. Blue Corn was one of the most honored of twentieth century potters. She received the 1981 New Mexico Governor's Award—New Mexico's highest artistic award—and she was acclaimed for her artistic accomplishments in the Wall Street Journal and AMEPNKA, a Soviet Union journal. She won awards at State Fairs, Indian Market, and many other notable exhibitions.

Provenance: this Blue Corn Polished Redware Jar with Eagle Feather Designs is from a private collection, formerly in the collection of Ray L. Kappmeyer