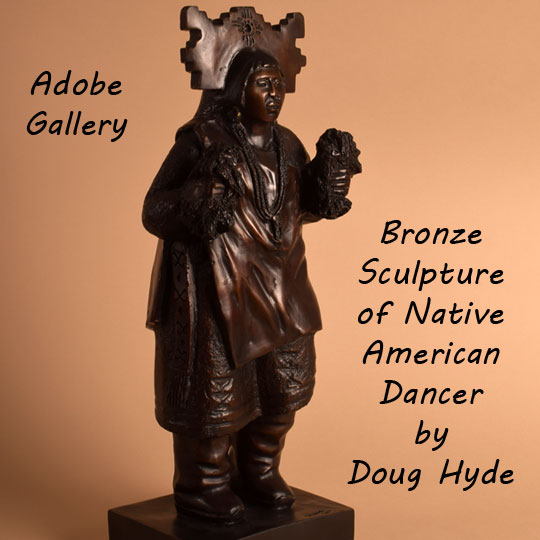 This bronze sculpture—titled "Pueblo Corn Dancer"—was created by Doug Hyde, a Native American artist who lives and works in Santa Fe.  It is a beautiful depiction of a woman performing a ceremonial dance.  She wears the traditional ceremonial dress and moccasins, and carries an evergreen bough in each hand.  The large tableta on her head is decorated with a sun design.  A long necklace with jaclas falls over her chest.

Hyde’s appreciation for his subject is evident in the careful attention paid to the minute details.  Note the texture of her clothing, the rumpled folds in her moccasins, and the hundreds of small impressions that create her moccasins—this is fine work that most certainly does justice to its subject.  The motion of the dance is captured perfectly by the position of her hands and her slightly raised knee. Her calm, focused look is similarly realistic.  The dance is a prayer, after all, and its performance is of the utmost importance to all involved. The bronze’s dark tone matches the beauty and depth of its form.  This is a fine example of Doug Hyde’s work.

Doug Hyde is an artist with Nez Perce, Assiniboine, and Chippewa ancestry.  Hyde was born in Oregon, and eventually made his way to Santa Fe, where he attended the Institute of American Indian Arts (IAIA).  During this period, he befriended and studied with influential Apache artist Allan Houser.  Hyde furthered his education at the San Francisco Institute of Art, and then served in the army in Vietnam.  After the war, he returned to Santa Fe to continue his sculpting practice and serve as a faculty member at IAIA.  He has exhibited widely and successfully in reputable galleries, and is considered to be a strong voice in the world of Native American art.

Provenance: this Bronze Sculpture of Native American Dancer by Doug Hyde is from a private Colorado collection