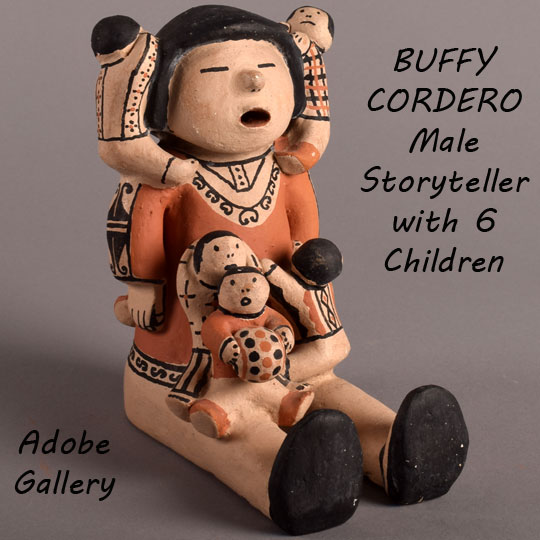 This charming storyteller by Cochiti Pueblo artist Buffy Cordero resembles quite accurately those by her mentor and grandmother, Helen Cordero.  He is seated with children all over his front, side, and back.  His eyes are closed and mouth open in the traditional style of the Cochiti storyteller figurine created by Helen Cordero in 1964.  The adult wears a beautifully decorated blouse with designs on the sleeves and around the hem.  He wears a squash blossom necklace.  There is one small boy climbing up his back, one on each shoulder and three on his legs.  Buffy used all males on this figurine.

Buffy Cordero Suina (1969- ) was a granddaughter of Fred and Helen Cordero.  Her mom and dad were George and Kathy Cordero.  She credits her interest in pottery to her dad and her grandmother.  It is most likely that Helen had more influence on Buffy as it appears that she quit potting following the death of Helen.  Buffy started making storyteller figurines around 1985 while still a teenager.

Provenance: Adobe Gallery purchased this BUFFY CORDERO Male Storyteller Figurine with 6 Children from Buffy herself in December 1987 and sold it to a client in January 1988, from whom we now have it back to exhibit again.  It is in its original condition.