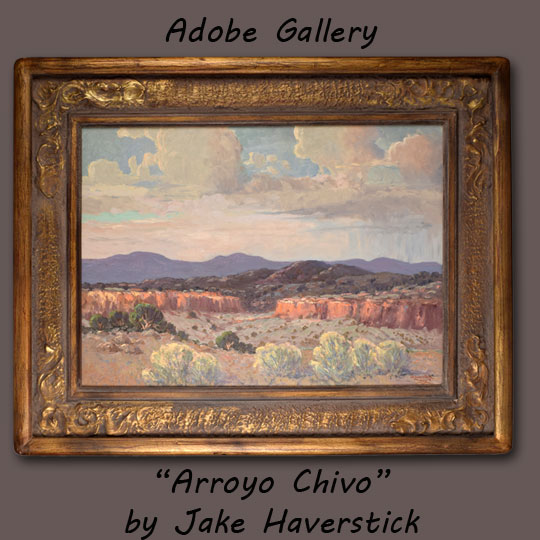 “Arroyo Chivo” is a large southwest desert landscape painting by Albuquerque, New Mexico artist Jake Haverstick.  Using oils on canvas, Haverstick created a serene Southwestern scene that will appeal to anyone who appreciates the natural beauty of the region.  In the foreground, we see a small group of plants.  Behind the plants, the gray earth stretches out and up, forming two mesas.  In the gap between the mesas, and rising above them as well, we see foothills.  Behind the hills, far off in the distance, is a purple mountain range. This is a classic Southwestern landscape, created with skill and style.

Above the mountain range, Haverstick created a sky in a state of transition.  On the far left, there are patches of bright blue peeking through cloud formations.  By the time we make it to the right side, the bright blues have been replaced by a vertical wash of gray, signifying a storm in the distance.  In the middle, these two states blend; the clouds carry a touch of gray, but the vertical lines are not present.  It’s beautiful, and it’s realistic—if you’ve spent time in the Southwest, you’ve seen many dramatic, beautiful skies like the one captured here by Haverstick.  “Arroyo Chivo” is a fine offering from Albuquerque painter Jake Haverstick.

The painting is signed J. Haverstick in lower right with his hallmark.  The following text is handwritten on verso: “Arroyo Chivo, (Goat Canyon), #291.”  The painting is framed in a large wooden frame that is carved and painted.  The frame itself is beautiful—ornate but subtle, large and heavy, but not overbearing.  It suits the painting perfectly, creating a wonderful presentation.

Jake (Ralph E.) Haverstick (1898-1962) was a painter who lived and worked in New Mexico.  While living in Taos, Haverstick met and was mentored by W. Herbert Buck Dunton, a member of the Taos Society of Artists.  He and his wife Fay eventually moved to Albuquerque.  He lived there for the remainder of his life, painting Western images.  Fay made beautiful handcrafted frames for the works of Jake and other notable Albuquerque painters.  Haverstick passed away in 1962.

Provenance: this Original Oil on Canvas Painting "Arroyo Chivo" by Jake Haverstick is from a private Santa Fe collection