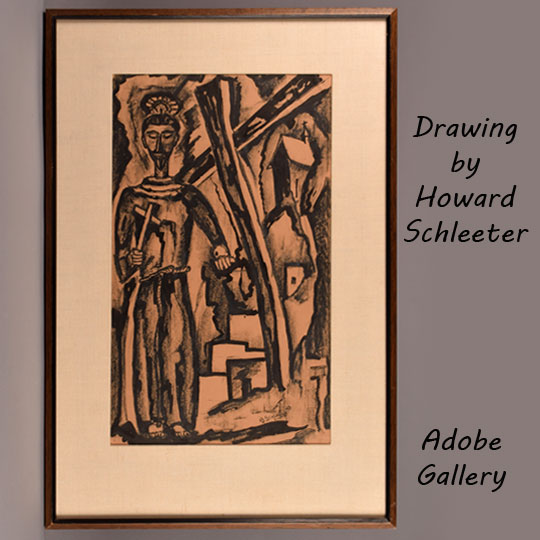 This charcoal and ink drawing was created by Howard Schleeter.  The image is dominated by strong religious imagery.  In the foreground, a robed man carries a cross.  His eyes are closed, perhaps in meditation or prayer.  He wears a cincture around his waist.  Behind the man is a massive cross, rising up from the earth and extending into the sky.  Behind the cross is a steep hill holding many dwellings. At the top of the hill is a chapel.

Schleeter’s work with this image, dated 1943, is excellent.  Charcoal and black ink were his tools of choice, and he used them skillfully and effectively.  A dark, jagged black border encircles the image, winding its way around and behind the man and his town.  The border merges with the steep hill, with thick black lines zigzagging their way down the image.  Shaded blocks of charcoal fill certain areas with varying degrees of opacity, creating deep, dark shadows.  The man himself is fairly clear, and so is the cross.  Everything else blurs together, creating a wonderfully dreamlike setting. The image is strong, dramatic, and beautiful.  We are pleased to venture outside of our primary areas of interest and offer this Howard Schleeter drawing to our readers. The drawing is signed “HB Schleeter” and dated 43 in lower right.  It is framed under acrylic in a simple wood frame, with a wide layer of fabric matting.

Howard Behling Schleeter (1903-1976) was an artist who was born in New York.  When Schleeter made the decision to make his living entirely as an artist in 1929, he traveled to New Mexico. He married the following year, and he and his wife made New Mexico their permanent home. The Great Depression took its toll on Schleeter, who occasionally found work digging ditches to make ends meet. In 1936, his financial status greatly improved when he received the first of several commissions from the Works Progress Administration (WPA).  In 1945, the Encyclopedia Britannica referred to Schleeter as “an artist’s artist.” He also received local attention when he became one of the first artists chosen by Peter Hurd and Jane Mabry for his significant contributions to New Mexico’s art. Schleeter taught at the University of New Mexico during 1950-1951 and 1954. He lived in Albuquerque from 1930 to 1970, with brief periods of living in Santa Fe (1958-1968) and Placitas (1970-1976).  Today, his works are highly sought.

Condition: this Charcoal and Ink Drawing dated ‘43 by Howard Behling Schleeter is in very good condition, with a few minor paper abrasions that are apparent only upon close inspection SOLDIERS OF THE CROSS: Notes on the Ecclesiastical History of New Mexico, Arizona and Colorado [SOLD]
by Most Rev. John Baptist Salpointe, D. D.

Saints of the Southwest (SOLD)
by Jim Griffith