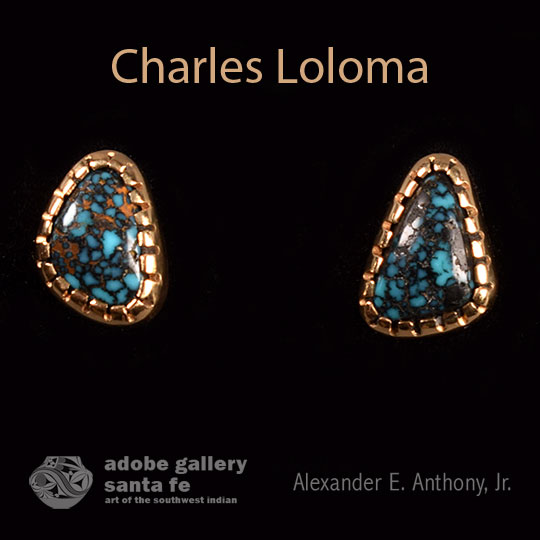 These small gold earrings by Hopi Pueblo artist Charles Loloma are an example of his creativity and technical accomplishments. Each of the earrings is host to a free-form Lander Blue Turquoise gemstone set in a gold bezel fitted for their secure protection. Each earring is stamped with the artist's name on the back side. The set appears to be in the original box in which it was issued.

Loloma's influence on Southwest Indian jewelry design is unmistakable. An entire generation of Native American artists was inspired by the work of Charles Loloma (1921-1991) to create in new and innovative ways. His own creations far exceeded anything by any other artist. His work ushered in a new era in Indian jewelry. Ironically, his initial submissions to the Gallup Inter-tribal Indian Ceremonial were rejected as not "looking Indian enough." By 1970, his jewelry was finding a wide audience of collectors. He had acquired a large national and international audience. Interest in his jewelry has continued today even though he has been gone for over two decades.

Provenance: from a selection of jewelry sent to us by a client from Colorado

Recommended Reading: Loloma—Beauty is His Name by Martha Hopkins Struever