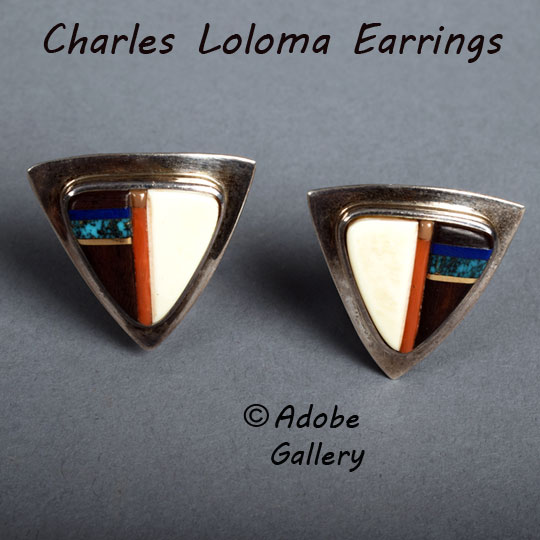 These earrings created by Hopi Pueblo artist Charles Loloma are exemplary of the caliber and creativity of his work. Classic in shape and creative in design and stone choice, these clip-on earrings are easy to wear.  Loloma chose fossilized ivory for the largest portion of inlay, separated by a thin band of red coral from wood, gold, turquoise, and lapis lazuli.

The wood is most likely ironwood as it is commonly found in the deserts of the Southwest.  The inlay of turquoise with small deposits in them is quite possibly Morenci turquoise.  One of the most famous and well-known American turquoise mines is the Morenci mine in southern Arizona. This mine was a major producer of natural gemstones that were used commercially for years in predominantly Southwestern and Native American jewelry.

There are no other earrings such as these.  Not only is the geometric shape and inlay arrangement a tell-tale signature of Loloma’s work, but the clip-on element makes these earrings wearable for anyone.  It is easily possible to love them for a wide variety of reasons and potentially seasons in one's life.

Loloma's influence on Southwest Indian jewelry design is unmistakable. An entire generation of Native American artists was inspired by the work of Charles Loloma (1921-1991) to create in new and innovative ways. His own creations far exceeded anything by any other artist. His work ushered in a new era in Indian jewelry. Ironically, his initial submissions to the Gallup Inter-tribal Indian Ceremonial were rejected as not "looking Indian enough." By 1970, his jewelry was finding a wide audience of collectors. He had acquired a large national and international audience. Interest in his jewelry has continued today even though he has been gone for three decades.  Loloma passed away in 1991, after a long and successful career making works in a variety of media. Today, he is regarded as one of the best and most influential jewelers of the twentieth century. His works continue to increase in value, visibility, and collectability.

Reference and Recommended Reading:  Loloma—Beauty is His Name, by Martha Hopkins Struever, 2005