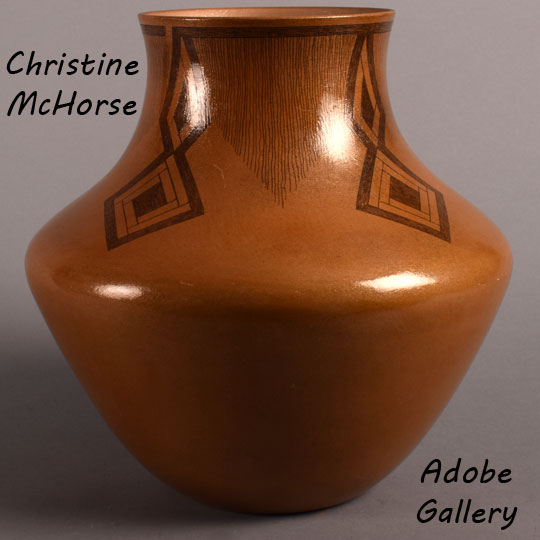 Twenty years ago, Christine McHorse made this paper-thin jar with designs around the neck.  She placed a thin layer of piñon sap over the vessel in traditional Diné fashion.  Christine went on to create a totally different style of pottery later in her career.

Christine created a design of diamond-shape elements filled with other smaller diamond elements.  The remarkable aspect of the design is the series of dark lines used in the diamond design and around the rim.  It might appear to be a painted solid border but is actually a number of parallel lines.  Located between the diamond shape design, Christine placed a grouping of lines that are pendant from the rim design.  They possibly represent rain.

Christine McHorse (1948-2021) Nofchissey was an innovative potter who successfully combined the techniques and materials of traditional pottery with contemporary non-traditional forms and firing methods. She used micaceous clay taken from the mountains near Taos to hand build her vessels using the coil method.

Christine was Diné. She married into the Taos Pueblo heritage where she was introduced to the mica-speckled clay by her husband's grandmother, Lena Archuleta, who had a curio shop in Taos. Her first formal training began at the Institute of American Indian Arts, which she attended beginning at age 13, when the institute was still a high school. Today, Christine's work reveals an ingenious combination of innovation and tradition, typical of the finest Navajo crafts.

Provenance: this Christine McHorse Large Pottery Jar in Diné Style was purchased from the artist in the summer of 2002 by our client from whose estate we now have it.