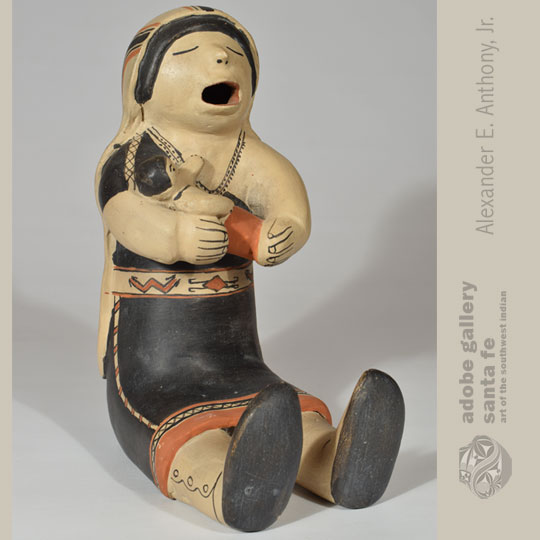 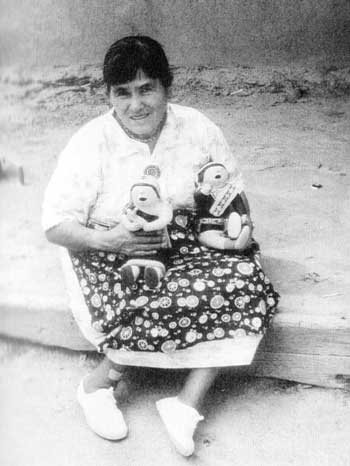 Helen Cordero was truly an original artist. Unable to fashion pottery vessels in a manner with which she could be satisfied, she changed her course to figurative pottery, rather than give up altogether. Little did she know that she was starting a new tradition in pueblo pottery production.

This figurine is one of her “singing mothers” holding a single child.  She is dressed in the traditional pueblo manta which rides over one shoulder and under the other.  Her waist is tied with a belt that hangs down her left side and her manta is fringed at the hem. She is wearing the traditional leather moccasins with leg wraps.  Over her head she is wearing a striped shawl. The adult’s eyes are closed and mouth open as she sings to the baby, a tradition that Cordero followed throughout her storyteller career.

Singing Mothers are significantly rarer than Storytellers because Cordero made so few of them compared with the larger number of storytellers.

This is an early 1970s figurine as evidenced by the warm cream slip used at that time.  The slips were rag wiped to achieve a warm glow. The 1970s are considered Cordero’s best period. 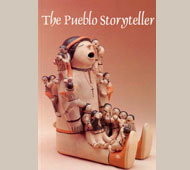 Condition: this Cochiti Pueblo Early Singing Mother Figurine with One Child is in excellent condition

Provenance: from a client living in Texas who plans to donate the proceeds to Habitat for Humanity

Recommended Reading: The Pueblo Storyteller: Development of a Figurative Ceramic Tradition  by Barbara A. Babcock.  A copy of the book, hardback, first edition, autographed by the author and by Helen Cordero, is included with the purchase of the figurine.