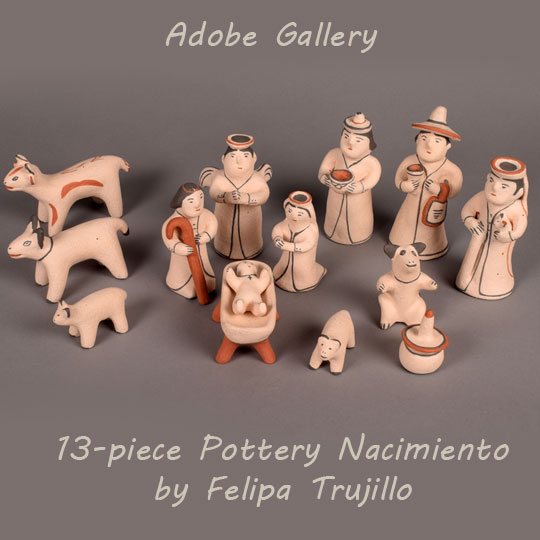 This pottery Nacimiento consists of 13 pieces-Joseph (with his staff that is not attached to the figurine), Mary, Jesús and his unattached cradle board, three wise men, an angel, 5 animals, and an extra gift of a large honey pot. Each of these was slipped in white clay and decorated with minimal designs. Some of the figures wear hats and some appear to have halos. The three kings bear gifts of a bowl, a bag, and a puppy. This set was made in 1972.

Babcock also states that Felipa Trujillo began making storyteller figurines in the mid-1960s.  We know that Helen Cordero made the first one in 1964, so Felipa Trujillo must not have been far behind her.  Felipa Trujillo was one of the seven artists represented in the Museum of International Folk Art exhibit "What is Folk Art?" in 1973.  Again, it seems obvious that Felipa Trujillo was one of the earliest potters to make storytellers. It is not known when she made the first nacimiento but there is one pictured in the book Nacimientos that is dated 1975.  Felipita stated that she was asked if she would make a nacimiento in 1969 and she said she would try.  It is assumed, then, that she made her first one around 1970.  Felipa dated this set '72 alongside her signature.

Provenance: this Cochiti Pueblo 13-piece Pottery Nacimiento by Felipa Trujillo is  from the collection of a family from Santa Fe

Reference: The Pueblo Storyteller: Development of a Figurative Ceramic Tradition by Barbara A. Babcock