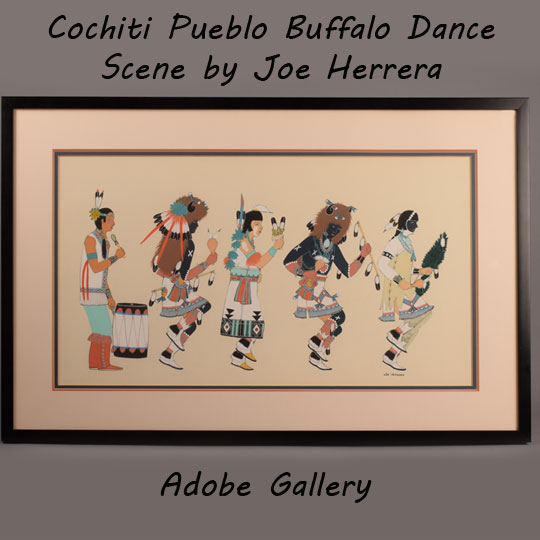 This original painting was created by Cochiti Pueblo artist Joe Herrera.  Five large figures occupy the image.  A man holding evergreen boughs and a rattle leads the procession.  Behind him, a Buffalo Dancer moves emphatically.  Behind the Buffalo, a woman dances with a focused expression.  A second Buffalo Dancer appears, mirroring the movements of the first.  A drummer follows, providing the crucial element of rhythm.

Herrera’s work with this dance procession is excellent.  Each participant is detailed and colorful, with movements that feel expressive and natural.  Herrera had a unique way with color, often making subtle enhancements to what we’d see in reality.  Here, it’s the blue, green, and orange tones that receive Herrera’s special treatment.  They’re bright and appealing, with a somewhat decorative warmth that is undoubtedly attractive.  We have seen this treatment in other paintings by the artist, and it always works well.  With this image, Herrara played by the rules of the traditional style, but he also incorporated his own voice through subtle manipulation of color.  This is a strong example of Joe Herrera’s work.

The painting is signed Joe Herrera in lower right.  It is framed beautifully using high-quality materials—multiple layers of matting in complementary tones, and a thin black

Joe Hilario Herrera (1923-2001) See Ru was an innovative and successful Native American painter.  His father was from Cochiti Pueblo, and his mother—pioneering painter Tonita Vigil Peña (1893-1949) Quah Ah—from San Ildefonso.  Though his artistic inheritance and early art education came from his mother, Herrera is rightly considered to be from Cochiti Pueblo. He attended the Santa Fe Indian School, served in the US Army during World War II, worked at the Laboratory of Anthropology, and eventually completed a degree in art education at the University of New Mexico.

In her book Southwest Indian Painting: A Changing Art, Clara Lee Tanner describes Herrera’s innovative style: “In the mid-1950s, Herrera developed a style which was encouraging for the future of Indian painting. The rich design—lore of the past and much that is prevalent in religious forms today he combined into abstract painting.  Again, it is the clever manipulation of the age-old and omnipresent themes—sun, moon, clouds, rain, lightning, kachinas, birds, the sacred serpent…The end product is essentially Indian; it is also modern, for abstract art is preoccupied with form and color and pattern.”  Dorothy Dunn’s American Indian Painting of the Southwest and Plains Areas states that he “did justice to a fine tradition in his authentically drawn ceremonial subjects.  His work was unlike that of his renowned mother, Quah Ah, for his was coolly decorative where hers was warmly natural.”

Provenance: this Cochiti Pueblo Five-Figure Buffalo Dance Scene by Joe Herrera is from the collection of an Albuquerque family