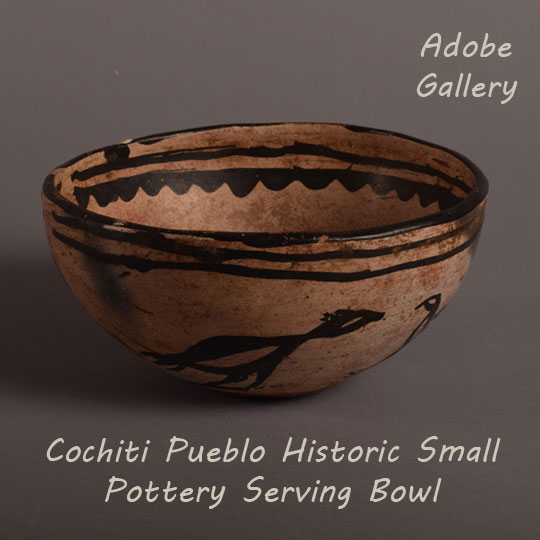 This wonderful historic pictorial pottery serving bowl shows evidence of extensive use at Cochiti Pueblo before it was released to the market. The exterior patina is that from many times being held and rubbed by human hands, and the interior shows abrasions consistent with utensil use.  Yet, the bowl is in very good condition.

The entire surface, except for a small area at the bottom, was covered with Cochiti bentonite cream slip, which was rag wiped to a smooth surface. The small area at the bottom and underneath was covered with a rich red slip which was polished.  Over the bentonite slip was painted the design, both inside and outside the bowl.  The inside design is a bundle of ovoid shapes executed in black pigment from which shoot six arrows which probably represent lightning. There is a framing line just below the rim and a wide line of clouds below that.

The exterior is one at which to marvel.  Five birds march across the surface, all facing left except one facing to the right.  The right-facing one is larger and bolder and seems to be confronting the more delicate bird it is facing.  Three of the left-facing birds appear to be walking and one is in flight.  A pair of framing lines encircles the bowl just below the black rim.  There is a wide ceremonial break between the pair of lines.  There is a line break on the rim, but it does not line up with the break in the framing lines.  A single framing line near the base only encircles half the vessel.

One can almost picture the potter, sitting at her kitchen table, painting the variety of birds, smiling while doing so.  She perhaps even let one of her daughters paint one or two of them.  That is the way the young girls learn the craft.

The bowl is quite a work of folk art but was made for daily use at the pueblo before being sold, probably reluctantly, to a visitor.  Selling something like this was a source of funds but also created the necessity to make a replacement.  It is our estimate that the bowl dates to circa 1920 or earlier.

Provenance: this Cochiti Pueblo Historic Small Pottery Serving Bowl with Intricate Designs is from a gentleman from New Jersey who is downsizing his collection.

Cochiti: A New Mexico Pueblo, Past and Present [SOLD]
by Charles Lange