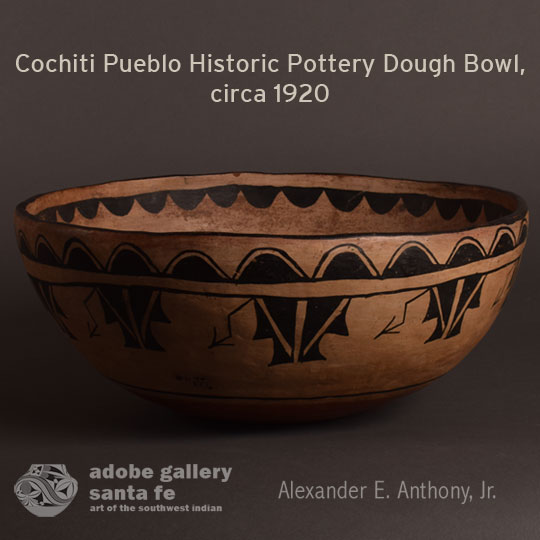 This is an exceptionally fine pottery dough bowl from Cochiti Pueblo, decorated in a white slip with black decoration and a red band that qualifies it as a Polychrome bowl.   It dates to circa 1920 and is typically Cochiti in all technical aspects: crystalline-rock temper in the paste, stone-polished bare paste underbody, black rim, rag-wiped bentonite slip and black guaco paint on interior and exterior. The stone-polished red band below the design panel is a trait of pottery to the late nineteenth century but one that continued into the early twentieth century.

Cochiti, at the turn of the century, made very little pottery for local use, importing it instead from Acoma, Zuni and Zia Pueblos.  What pottery the potters were making was mostly limited to figurative type—effigy vessels and human and animal figurines.

The flat bottom of the bowl swells outward to a rounded body that just slightly curves inward at the rim. The interior design is a beautiful circular pattern of sun flower shape with radiating rays and floral elements expanding outward.  Clouds are pendant near the rim. On the exterior, the design consists of connected clouds just under the rim and clouds and lightning below those.

The bowl is a fine example of Cochiti mastery.  There is a series of numbers inked in on the side of the bowl that appear to be museum accession data but the origin of those is not known.

Condition:  it appears that a section of the bowl was broken off and restored.  The restoration is visible on the interior of the Cochiti Pueblo Historic Pottery Dough Bowl, circa 1920, but it is not obtrusive.