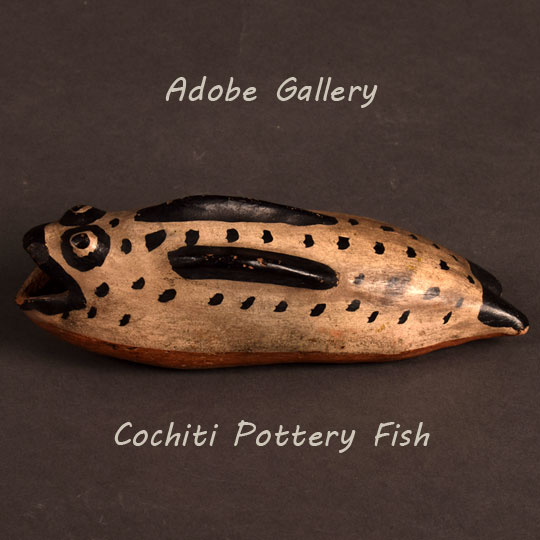 Adobe Gallery is very confident that this fish was made by Damacia Cordero of Cochiti Pueblo.  Unfortunately, she did not sign her name to the figurine.  Damacia (1905-1989) was one of the major potters at Cochiti to make unusual figurines.  She began making pottery around 1920.  The cream Bentonite slip of the figurine has mellowed over the years.  That, plus the red slip applied near the base of the fish is an indication that this figurine is one from the early- to mid-twentieth century, probably circa 1930s.  The red slip is a carryover from a tradition on water jars, and is not seen on later figurine pottery.

Provenance: this Cochiti Pueblo Twentieth Century Pottery Fish attributed to Damacia Cordero is from the estate of Henry Christensen, former attorney at law of New York, who purchased this from us in 1998.