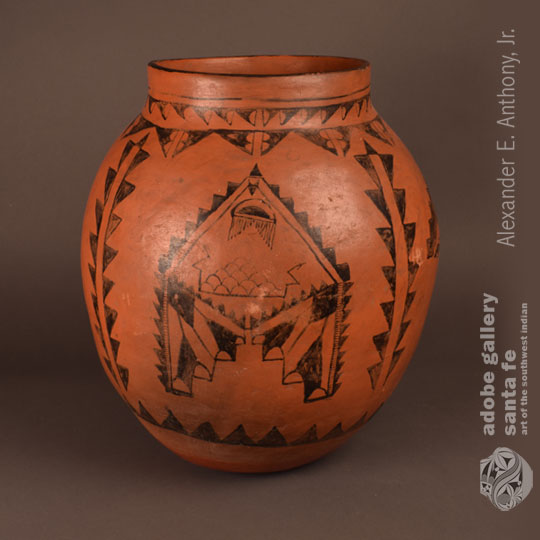 In the early twentieth century—1900-1910, specifically—a potter at Cochiti Pueblo broke with tradition. She experimented with a slip of a different source—red clay rather than traditional cream clay—for the base coat over which to apply the selected design.  This was the same period when the Aguilar sisters of Santo Domingo Pueblo were experimenting with changes to their pottery. Such changes could have been a result of the influx of tourists on the intercontinental train from Chicago to California, which passed through New Mexico.  It is not likely, however, that this large jar was meant to be sold to a traveler, as it would have been too large for transport on the train. Perhaps she was simply expressing a need to try something new and exciting.

Such a large vessel was generally stored in a pueblo home and used to store anything of value—food, treasures, clothing, dance paraphernalia, etc.  Bowls or baskets overturned on the jars’ openings served as lids.

The designs are pictorial, in traditional Cochiti Pueblo style.  A large design on the mid-body appears to be a moth or butterfly, over which is a cloud gently dropping rain.  The design on the opposite side of the jar is more typical of Cochiti potters’ cartouche designs, similar to those used by Tonita Peña on her paintings.  This one contains a formation of clouds with lightning, over which is another cloud with falling rain. Other designs throughout the jar, around the neck and near the base are comprised of black triangles in various arrangements.

This Cochiti Pueblo pottery jar is magnificent in many ways. Its size is impressive, its shape is appealing, and its unusual color is exciting.  Its design work, too, is extraordinarily expressive. It feels loose and unrestrained, as if the potter was working from a very passionate place. Also notable is the fact that this would have been a very difficult piece to fire in a traditional outdoor setting.  Such large ones often heat unevenly during firing, resulting in damage to the vessel. Not only was this potter an amazingly creative artist, she was clearly a master craftswoman, too—the jar’s consistently fired surface is as impressive as any of its more immediately noticeable strengths.

Provenance: this Cochiti Pueblo Very Large Historic Pottery Storage Jar with Red Slip is from a gentleman from Taos, NM