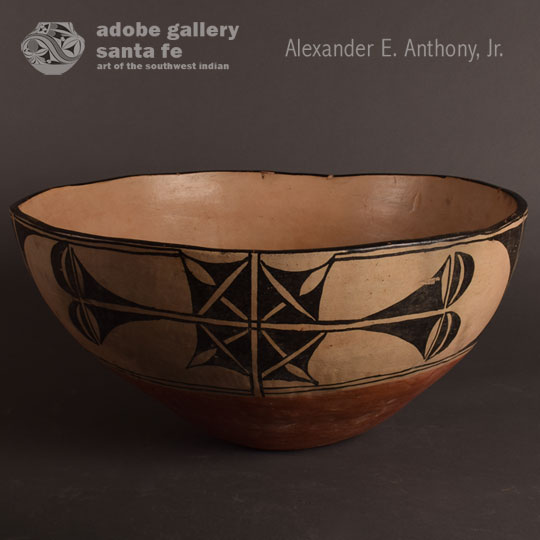 It is sometimes a question in one’s mind whether a vessel originated at Cochiti Pueblo or Santo Domingo Pueblo.  Pottery from both are quite often similar and one must select based usually on the design. It has been stated that potters at Santo Domingo did not and do not use rain clouds in the decoration.  If this is a true and proven statement, then the decision must be made that this bowl was made at Cochiti Pueblo. The paired horizontal circular elements are certainly rain clouds.

This historic pottery bowl tilts slightly but I have been told that this was sometimes deliberate as it would be more practical for kneading bread dough from the lower side of the bowl, pushing the dough toward the higher wall.  The interior of the bowl was finished with cream bentonite slip which was polished for the purpose of sealing the surface. The design on the exterior was executed in strong black on the cream background slip. The bowl quite likely dates to the 1930s.

Cochiti, at the turn of the last century, made very little pottery for local use, importing it instead from Acoma, Zuni and Zia Pueblos.  What pottery the potters were making was mostly limited to figurative type—effigy vessels and human and animal figurines. Today most Cochiti potters make storyteller figurines and nacimientos (nativity sets).  Dough bowls from Cochiti are a thing of the past.

Provenance: from the collection of a gentleman from Washington, DC