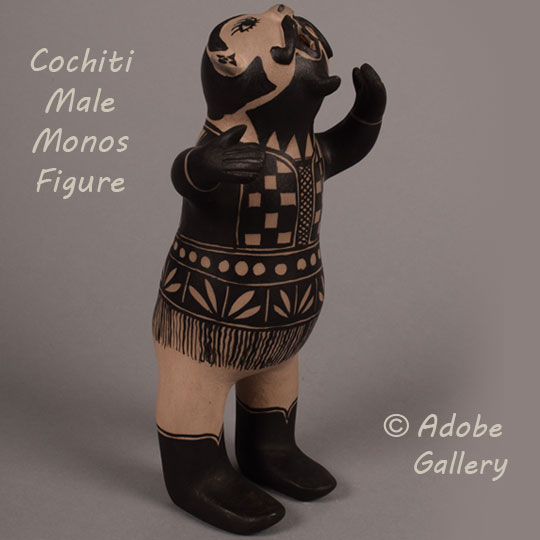 This pottery figurine was made by Juanita Inez Ortiz of Cochiti Pueblo. As the daughter of Seferina Ortiz, sister of Virgil Ortiz, and mother of Lisa Holt, Inez comes from a family that produces excellent pottery figurines in a variety of styles. The majority of Inez' works that we've handled previously have been traditional in style. This piece, interestingly, looks and feels more like the modern styles practiced by the artist's sibling and daughter than the earlier style practiced by her mother.

While contemporary in style, this piece carries on the longstanding Cochiti tradition of depicting non-Native subjects. He could be an opera singer—his open mouth and raised hands suggest a spirited performance of some sort—or he might be a merchant. He wears an elaborately designed outfit, including a checkerboard-patterned vest and a fringed belt. His expressive face, with its huge handlebar mustache and exaggerated eyelashes, is an absolute delight.

The figurine's left foot is signed I. Ortiz, Cochiti

Cochiti Pueblo potter Juanita Inez Ortiz (1960 -2008) Mapuwana - Wild Rose learned pottery making from her mother, Seferina, and her grandmother, Laurencita Herrera. It is traditional for pueblo potters to teach their children the art of pottery making starting at an early age. Inez' siblings, all of whom are potters, are Virgil, Joyce, and Janice. She is the mother of Lisa Holt. Inez has received notable awards from Santa Fe Indian Market and other exhibitions.

"I make all kinds of things: bears, nativity sets, miniatures, storyteller figurines, owls, turtles, and clay drums. I mold the ‘couple' pieces [a man and woman together] in different sizes. I'm also into the ceramics to make some things easier. I go back to the traditional because people like it." - Inez Ortiz (Dillingham 1994, page 127)

Provenance: this Male Monos Figure with Elaborately Designed Clothing is from a private California collection