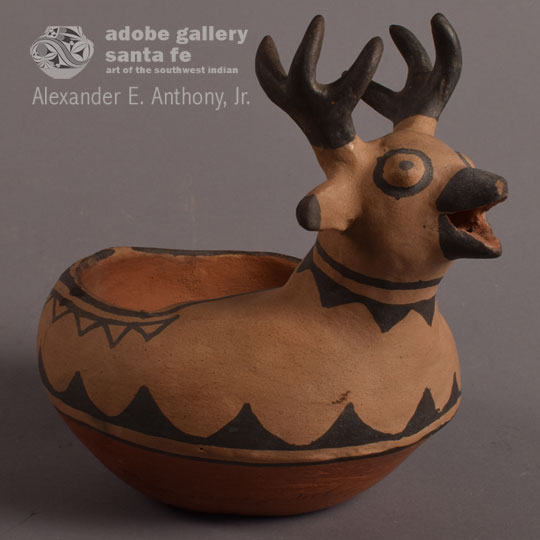 This Cochiti Pueblo pottery effigy vessel by Damacia Cordero is comprised of a bowl with a deer’s head and short tail.  The deer’s mouth is open and he has bulging eyes, ears sticking out and nice antlers. Around his neck is a collar of a single thin line and one of black triangles.  In the back of the deer’s head, the collar has a ceremonial line break.

The bowl section repeats the triangle design elements.  The row nearest the rim is outlined in black and the row below that is black triangles pointing upward.  This design, as well, has a ceremonial line break. The tail is black. The underbody is covered with polished red slip.  The artist’s name was written in the red underbody in cursive.

Damacia Cordero (1905-1989) was a legend from Cochiti Pueblo. Her storyteller figurines and animal creations were unlike any other potter's work.  Damacia’s figurines are recognizable even when not signed by the artist. She was one of the most prolific figurine potters of the 20th century, yet her pieces are some of the most sought after. She made figurines with more character and expression than the majority of potters.

Not only was Damacia Cordero herself famous as an artist, she produced four very talented daughters who achieved notoriety as potters too: Josephine Arquero, Gloria Herrera, Marie Laweka, and Martha Arquero. All of the family specialized in making figurines: storytellers, nacimientos, clowns, and animals.

This is a charming combination of vessel and animal.  I do not recall ever having seen a similar one by Damacia.

Provenance: from the collection of a client of ours