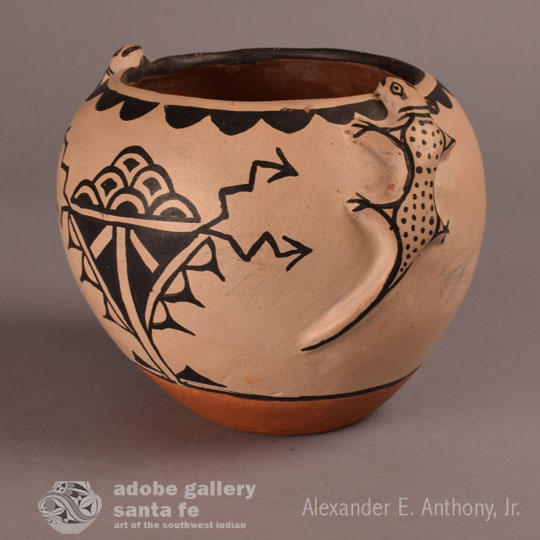 This Cochiti Pueblo pottery jar has been attributed to artist Seferina Ortiz based on similar jars known to be by her.  Comparison of the lizards and painted design leads to the attribution as well as comparison with signed examples from the 1970s.  The attribution was made by John Barry, a long-time dealer/collector/author of New Mexico pueblo pottery.

In addition to the pair of appliqué lizards climbing up the wall toward the rim, there is a beautiful traditional Cochiti Pueblo design incorporating clouds, lightning and rain.  It is repeated on opposite sides of the jar.

Seferina Ortiz (1931-2007) had a long and distinguished career of making pottery.  She made bowls, jars, animal figurines, storytellers and other items and she has a large cadre of collectors interested in her work.

It is unfortunate that Seferina is no longer with us, but her legacy will continue through her pottery creations and through her talented children—Virgil, Joyce, Janice and Angie.

Condition: this Cochiti Pueblo Pottery Jar with Appliqué Lizards by Seferina Ortiz has black marks around the jar’s widest point and minor surface abrasions, typical of a jar of this age.

Provenance: previously from the collection of author/dealer/collector of Native arts John W. Barry.  Now from the client to whom we sold it in 2012.