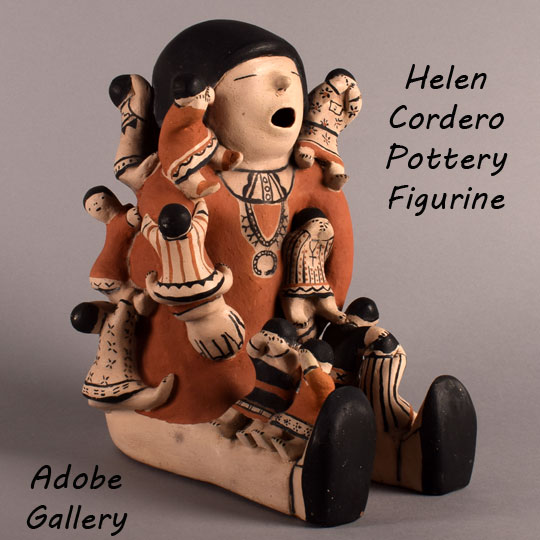 This Helen Cordero storyteller figurine has 14 children clamoring over him—on his front, back, shoulders, arms, and legs.  It is one she made in the early- to mid- 1970s.  The adult has an orange shirt with a button collar, and he wears a squash blossom necklace.  The children—boys and girls—are beautifully dressed in designed clothing.  Each child is different with some with hands over their eyes, and others with varying expressions.

The 1970s was Helen’s best period.  She started the storyteller phenomenon in 1964, and by 1970, she had settled on her style that she followed through the remainder of her career.  Throughout her career, Helen Cordero (1915-1994) made male storytellers, female singing mothers, Hopi maidens with traditional Hopi unmarried girl’s hair style, nacimientos and a figurine named mother turtle.  She never went back to try and make bowls and other vessels. She had found her talent in making figurative pottery and we, as collectors, are the richer for it.

Condition: the figurine is in very good condition.

Provenance: this Cochiti Pueblo Storyteller Figurine with 14 Children by Helen Cordero is from the estate of a previous client of ours to whom we sold this in 2004 and now have back to sell again.