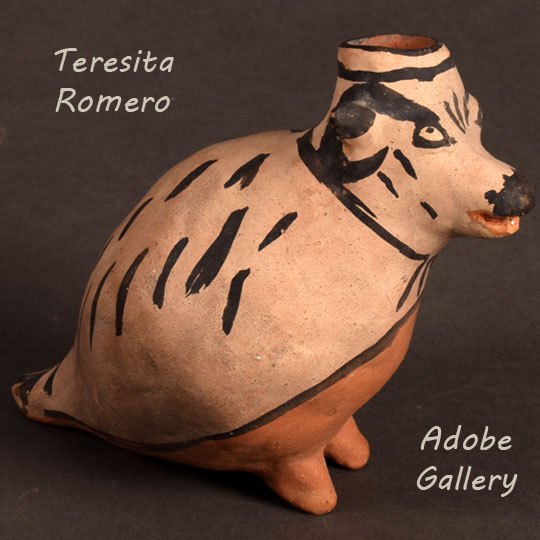 This Cochiti Pueblo pottery figure of a cow was made by Teresita Romero.  The cow is fat and content, and has its head tilted slightly as it gazes ahead.  A little history to clarify why we have attributed this cow to Teresita, since it was not signed by her.  We acquired this figurine from Paul R. Kintzinger, a resident of Cochiti Lake, in 1998.  Paul indicated that he purchased it from Teresita.  We have penciled her name on the figure for future reference.

Teresita Chavez Romero (1894-1991) was best known for making large jars and storyteller figurines. She was active only from around 1910s to 1960s, so her pottery is rather difficult to find.  Her grandsons, Mateo Romero and Diego Romero, have continued in the tradition of the Cochiti Pueblo artisans, but in a more contemporary and expressive manner than the family tradition.

Examples of Teresita’s pottery are included in the Alexander Girard Collection of Folk Art at The Museum of International Folk Art in Santa Fe. She was also exhibited in the “One Space, Three Visions” exhibit that opened at the Albuquerque Museum in 1979. A seated female holding a plate of oven bread is in the collection of The Laboratory of Anthropology in Santa Fe.

Condition: good condition except for minor chipping on the lower lip.

Provenance: this Cochiti Pueblo Twentieth Century pottery cow by Teresita Romero is from the estate of Henry Christensen, former attorney at law of New York, who purchased this from us in 1998.