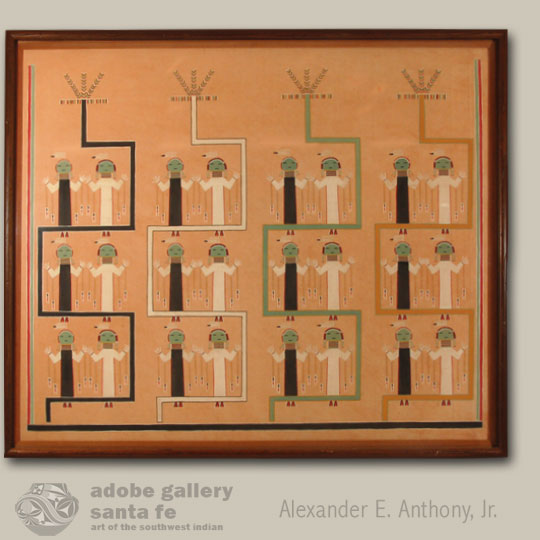 Navajo memory aids had their beginnings with medicine men in preparation for making a sand painting and for preparing their apprentices to become medicine men in the far future.  To become a medicine man, the person must know the intricate details of preparing sand paintings used in ceremonial functions, such as healing ceremonies. A sand painting, to accomplish its intended purpose, must be constructed in accurate detail, something that could take years and years for an apprentice to master.  To assist in the learning process, aids were used as guidance through the process of drawing the proposed sand painting on a fabric scrap in preparation for preparing a sand painting.

Modern memory aids seemed to have appeared on the market in the 1980s and were being made by Dennis and Bruce Hathale of the four corners area of New Mexico, around Farmington.  It was likely a trader in Farmington, Jack Beasley, who marketed the new memory aids. It is not known whether these newly made memory aids were true representation of sand paintings or just drawings made by the Hathale brothers.  The style, material and pigments are very similar for all the paintings, an indication that they were made by the same person or same family.

Modern memory aids are painted on muslin or bed sheets, stained with local colored sands to give them the correct background color.  Only natural pigments are used. Earlier memory aids were executed on buckskin and could be unrolled and viewed as a sand paintings was begun.  After the arrival of Spanish and Anglo intruders, medicine men quit making memory aids and committed the design to memory as a means of protecting their ceremonies from these outsiders and to protect the sand paintings from losing their powers.

This memory aid was painted on fabric and is an image of paired Yei figures superimposed on zigzag corn plants. Yei figures are often seen in pairs, as in this drawing. They do appear in pairs on the sandpainting of the Nightway Chant, so we may conclude that this portion of this memory aid is accurate.  Having the pairs superimposed on irregular corn plants could be questionable, however, we do not know the designs of all sandpaintings that have existed.

Provenance: from a family in Santa Fe who found it necessary to sacrifice some of their art when they combined their two homes into one.

Recommended Reading:  Sandpaintings of the Navaho Shootingway and The Walcott Collection 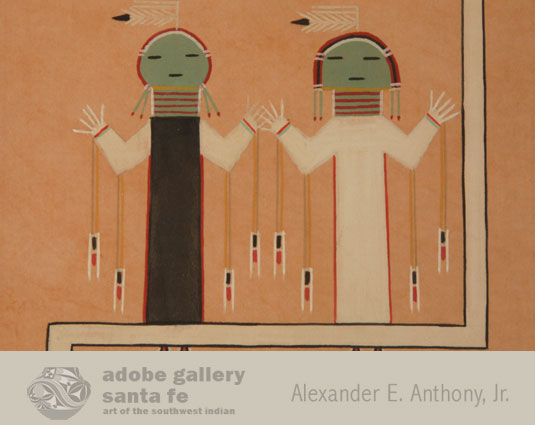