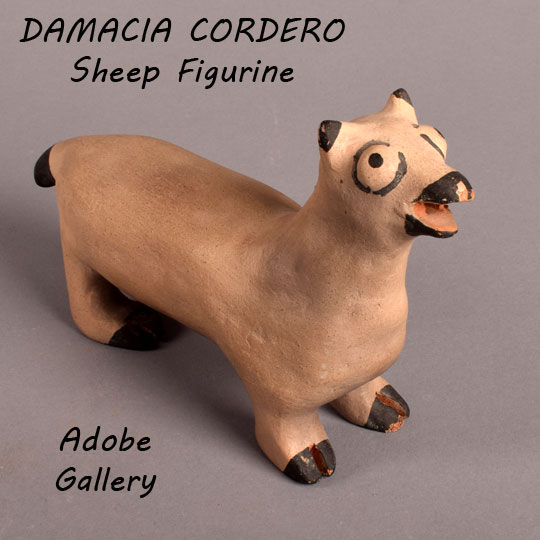 Cochiti Pueblo artist Damacia Cordero had a long and successful career of making pottery figurines—both human and animal.  She made this pottery sheep.  It is not signed but is without question her work.  She was making figurines as early as the 1920s and was working with the clay during an era known in America as its first Great Depression when many others ceased making pottery for sale as there were not many buyers.

Figurines like this Damacia Cordero Pottery Sheep Figurine from Cochiti Pueblo were made for the marketplace and were highly successful sales for potters.  For some reason, Damacia Cordero failed to sign this one but the style is very identifiable as her work.  Minor chipping on the hoofs of the sheep are present but not detracting.

Adobe Gallery purchased this sheep figure from the collection of Harvey and Lise Hoshour in August 1987. In 1962, Hoshour was teaching at the University of New Mexico in the Department of Architecture. He worked for Alexander Girard in Santa Fe before opening his own practice in 1963 in downtown Albuquerque. Hoshour’s connection with Girard obviously influenced his interest in figurines.  We obtained several from the Houshors, including one by Helen Cordero.  We sold this one in 1989 to the client from whom we now have it back.