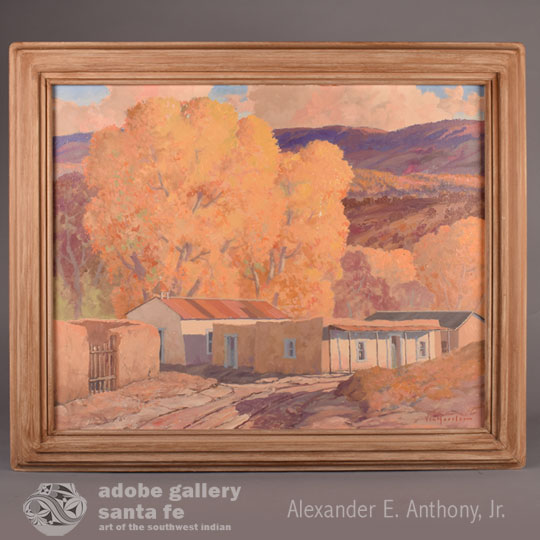 This beautiful oil painting by Albuquerque resident Carl Von Hassler made its way to the gallery at the tail end of the season.  It depicts fall. It’s no wonder that the artists of the area use this brief window of time as inspiration for their works, as New Mexico’s unique beauty is elevated and intensified each year when the leaves turn bright yellow. Von Hassler’s image is dominated by these bright yellow leaves.  They cover nearly half of the painting’s surface, extending up from behind a row of buildings into a crisp Southwestern sky.

Two massive trees—rising from behind a red and white church—provide the majority of the yellow. A smaller group is visible in the distance, reaching up from behind a series of buildings.  A road winds alongside the buildings, ultimately curving towards the viewer. In the background, colorful hills give way to a cloudy sky. As far as subject matter and composition go, this is classic Von Hassler.  What’s notable about this particular piece is the color pallette. Upon first viewing, one might not notice the subtle but remarkable use of color. Von Hassler’s image is, as per usual, mostly composed of the actual colors he’d have seen while studying his subject.  A cursory glance suggests a totally natural landscape, but a closer look reveals otherwise. The artist added touches of pink and bright orange to most everything here. These colors give the image a warm, magical glow that will undoubtedly resonate with anyone who has visited the region during the fall.

Carl Von Hassler (1887-1969) was born March 18, 1887 to a Dutch father and a French mother on a train in Germany. Von Hassler moved to Albuquerque, New Mexico in the early 1920s. He was known as the “Dean of the Albuquerque Art Colony.” Born in Bremen, Germany, Von Hassler attended the Dusseldorf Art Academy. When he came to the United States, he lived for a while in Greenwich Village in New York and was a member of the famed group of painters who called themselves the “Greenwich Ash Can Group.”  In his early years in Albuquerque, Von Hassler's studio was in the original Casa de Armijo (now La Placita Restaurant) in Old Town. He was best known for his traditional realistic landscapes of New Mexico and his Indian portraits.

He spent almost half of his 47 years here developing a new painting technique that caused a stir in art circles. "I invented it myself," the artist said. "It is known to no one else." His paintings had an almost ceramic quality with colors that do not fade. He baked the paintings at up to 600 degrees. He also developed what he described as an "atomic substance" to paint on to withstand the heat. It made his paintings fire and heat resistant.

His works are now collector's items, and many prominent Albuquerqueans own his paintings. He taught privately, and among his better known former pupils are Sam Smith, Ben Turner, Walter Bambrook, Novella King, and Betty Sabo. Von Hassler passed away in Albuquerque on November 30, 1969, at the age of 83.

Provenance: Purchased directly from the artist by a resident of Albuquerque of the Ilfeld merchant family.  Now from a family member of the Santa Fe Staab families and Ilfeld families.