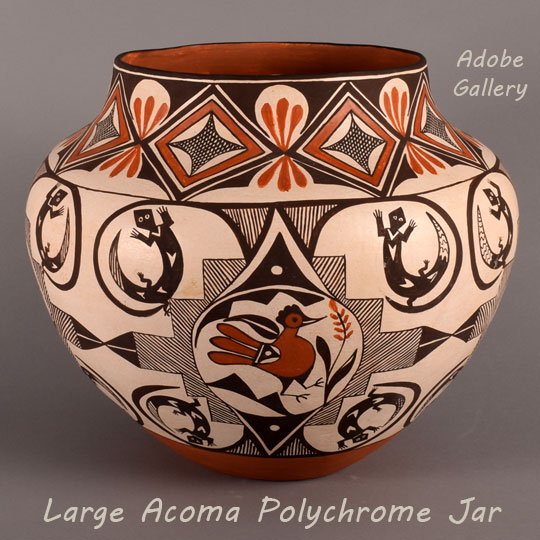 This polychrome pottery jar was created by artist Frances P. Torivio of Acoma Pueblo. Its form is that of a common traditional OLLA, or water jar, but enlarged by a few inches. At twelve inches in height and fourteen in diameter, it is a large and impressive piece of pottery. Creating a piece like this requires skill, experience, and dedication; the helping hand of a family member or neighbor is called for on occasion.

Torivio created two design bands on the exterior of the jar. The upper band, which runs from the shoulder to the rim, features a pattern of orange diamonds set within larger black diamonds. Down below, a larger and more intricate design band covers most of the remainder of the jar. This band uses four repetitions of an intricate design, which centers around an orange bird. The bird, situated within a circular form, hops from its perch on a nearby plant. A variety of forms emerge outside of the circle, with kiva step patterns reaching out from the sides and triangular forms decorating the top and bottom. Mimbres-inspired lizards appear on each of the four corners. This elaborate design repeats four times, which means that there are four birds and sixteen lizards in total—a lot of life and energy for one jar, but it feels appropriate for this large piece. Torivio’s work with this piece is excellent.

The bottom of the jar is signed Frances Torivio Pino, Acoma N.M.

Frances P. Torivio (1905-2001) was an Acoma Pueblo potter. Torivio was a sister of Lolita Concho and the mother of Lilly Salvador and Wanda Aragon. She was one of the important matriarchs of Acoma Pueblo, mentoring her daughters and other potters. Torivio began potting in the 1920s and enjoyed a long and fruitful career. She is known for Mimbres and Anasazi Revival pieces in black-on-white and traditional polychrome, and she created a wide variety of forms. She was still attending the Santa Fe Indian Market in 2001 at the age of 96. Torivio exhibited widely, received many significant awards, and placed works in a variety of notable collections.

Provenance: this Frances Torivio Large Acoma Polychrome Pottery Jar with Lizards and Birds is from a private New Mexico collection