Fritz Scholder “Memories of Egypt as the Sphinx” Trial Proof 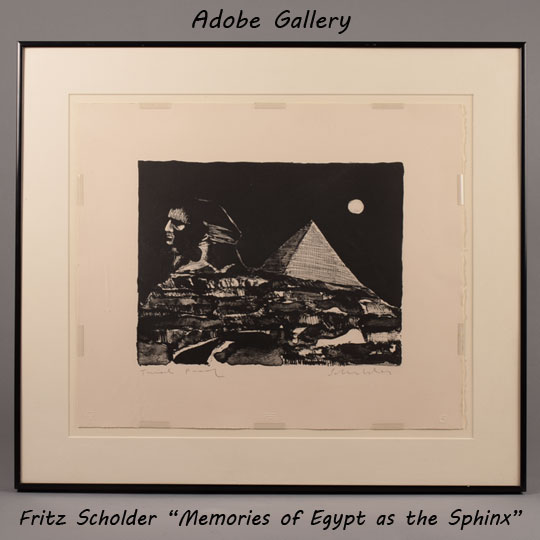 “Memories of Egypt as the Sphinx” is a stone lithograph by Luiseño artist Fritz Scholder. After a few frustrating and unsuccessful experiments with the medium, Scholder began properly exploring lithography in 1969. With the help of Albuquerque’s Tamarind Institute and its experienced professional printmakers, Scholder discovered that his compositional talents were well-suited to lithography. His exploration and eventual mastery of the medium reinvigorated him creatively and encouraged him to explore styles and themes he’d not yet explored in his paintings.

Scholder traveled to Egypt in 1974. During his trip and throughout the rest of his career, he painted many images of ancient Egypt, the pyramids and the Sphinx.  He returned in 1982, this time at the invitation of a famed archeologist. This particular Egypt-themed piece dates to 1977. The piece features the Sphinx, a pyramid, and a bright rising moon. It’s a single-color print, made using only black ink. Scholder’s dreamy compositional style works particularly well in the cascading blocks of limestone and the pyramid’s textured exterior. The stark black and white look suits the mysterious image perfectly.

The lithograph is signed Scholder, labeled “Trial Proof” in pencil, and marked with the chop marks of the artist, printer, and print shop. It is mounted with the entire paper exposed, over an off-white backing in a thin wood frame.

Fritz Scholder (1937-2005) was by birth one-quarter Luiseño Indian, a California Mission Tribe. He was born in Minnesota, spent two decades in the Dakotas, and lived in Galisteo, NM, and Scottsdale, AZ.  Fritz Scholder came to Santa Fe in 1964 to teach advanced painting and art history at the new Institute of American Indian Arts, a school established by the United States Department of the Interior. He obtained a Master of Fine Arts degree at the University of Arizona in 1964 before moving to Santa Fe and joining IAIA.  Fritz Scholder enjoyed a long and successful career and is regarded today as one of the most innovative and influential Native artists.

Provenance: this Fritz Scholder "Memories of Egypt as the Sphinx" Trial Proof is from a private Santa Fe collection